Coding education even helps the 70% of Coding Dojo graduates with bachelor’s, master’s and doctorate degrees increase salaries by an average of 58%

BELLEVUE, WASH and SAN JOSE, CALIF – March 6, 2018 – Coding Dojo, a premier coding school for aspiring software developers, today released results of a graduate study demonstrating that its curriculum transforms lives for students of all backgrounds. Specifically, it found that for students with a high school degree or equivalent, salaries more than doubled immediately after graduating from Coding Dojo. The majority of Coding Dojo graduates (70 percent) already had a bachelor’s or post-graduate degree when enrolling. Even with this strong educational background, after graduating from Coding Dojo, these students were able to increase salaries by an average of 58 percent.

“Learning to code can be transformative, and one of the most concrete measurements of that is the economic mobility that our graduates realize,” said Coding Dojo COO and CFO Jay Patel. “Coding Dojo has long believed everyone can learn to code with the right resources and motivation, from a high school grad to a doctor. We’re proud to say this sample study shows you will find both of those groups rubbing elbows on our campuses—and the impact on their earning potential is substantial.”

The study analyzed Coding Dojo’s student body by formal education level and included the percent salary increase from their most recently held job prior to starting the program to their first tech position after graduation. 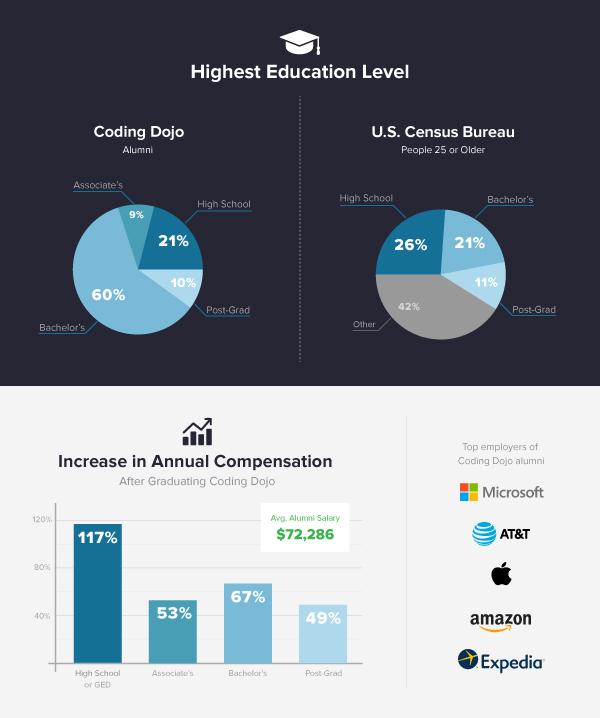 “I attended a coding bootcamp because I knew that a solid technical foundation combined with my medical background would be a unique combination of skills that would position me for roles in advancing medicine and healthcare over the next few decades,” said Coding Dojo graduate Kwame Johnson who has an M.D. from Duke University School of Medicine and is currently a program manager at Microsoft. “A change from the medical to technology field made sense for me, and my career outlook and earnings potential haven’t been better.”