Home >All Posts>Which Software Developers Make the Most Money?

In the modern workforce, there are a few key variables to assess when asking which software developers make the most money?

How much experience do you have? Which languages do you know? Where do you live? Which company are you working for?

We’ve searched through these questions and found a few key trends that can affect your salary. So if you want to be the on the right of which software developers make the most money, you should:

If you want to do all four, it’s worth considering joining one of our coding bootcamps. There are few more tried and trusted ways to land a software development job than one of Coding Dojo’s bootcamps. Whether you want to learn coding full-time, part-time, online, or in person, our coding bootcamp can teach you all three stacks and the most popular coding languages at your own pace.

We also offer lifetime career services, which can aid you in becoming a software developer that makes the most. For now, let’s break it down and see exactly why these four assets are so important.

Software developers were paid the most if…

They know a niche language

The fewer people who know a language, the more demand there is for those specialized skills. Companies inevitably fight over the limited number of potential employees. So they have to pay more to entice people. Problem is, there are also far fewer jobs for those languages.

In 2019, Dice Tech created a report on the top skills in the industry. Along with skills like knowing how to use Amazon services, they found that Go was the most profitable language to learn. The average salary in 2018 for Go was $132,827.

It’s the inverse when it comes to the number of jobs.

The more jobs out there, the lower the salary. So which language gives you the right balance, between the jobs being there and the salary being high? If we look at the top programming languages of 2022, and compare with Dice Tech’s report, we find that all the most in-demand languages pay over $100,000. But that Perl, the language with the fewest available jobs, pays the most.

Clearly, learning a niche language will pay off if you land a job. But is that difference all that much, in the grand scheme of things? It could be much tougher to find a job, even if you could make more money.

We’d say it’s worth knowing that niche, well-paid language. But that it’d be much less risky to have a backup, more popular language, as well. When considering what language is the answer toward which software developers make the most money, Java seems to be a good choice here.

Live in a tech hub

Location clearly matters. Depending on where you live, your salary can change by tens of thousands of dollars. According to PayScale, San Francisco is the highest paid location. This is quite clearly dominated by Silicon Valley – obviously, the tech hub of the world is going to have the best wages.

But if you’re looking to move to a more lucrative area, it might be a good idea to consider Seattle as well. 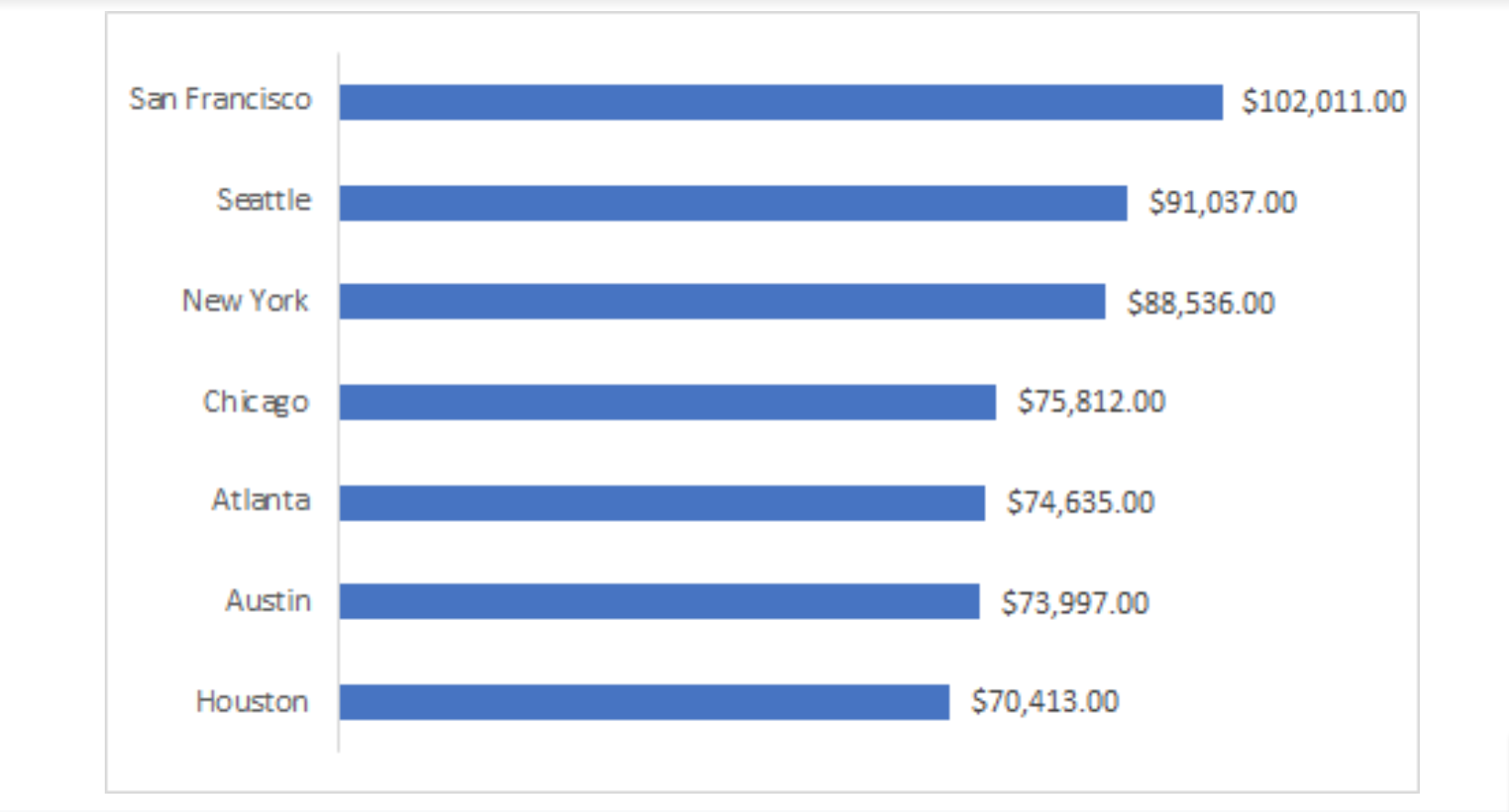 Not everybody has the luxury of being able to completely upheave their life and head to a different state. And that’s not even considering the cost of living in these areas, too. While a big city might attract the best salaries, they’re often the most expensive places to live. New York City, for example, is notoriously expensive.

Fortunately, as remote work continues to be a path forward for many tech companies, this aspect might be less needed than it once was. Now, coders in Kansas City can work for a Silicon Valley company, and while their salary may not be what it would be if they lived in San Francisco, it will still high for the market value of Kansas City, or whichever city a coder lives in.

Work for one of the big tech names

This is pretty obvious. But companies like Amazon pay around $133,000 for a senior software developer. Of course, these kinds of companies demand a lot more from their programmers. They expect the top talent, and everybody is looking to join them. So the competition is going to be fierce.

But it’s still worth trying. Microsoft pays around $120,000 for a regular software engineer, with Amazon close behind at $115,000. If you’re looking to get the best salary, targeting those big names is the best strategy.

Gain a lot of experience

The more you know about programming, and the longer you’ve been in the industry, the more you’re going to get paid. According to PayScale, a software developer with one year’s experience is likely to make around $75,000. While one with 20 years of experience would be earning around $111,000.

There are a lot of ways of earning that experience. It doesn’t always need to be with a specific company. Projects you’ve done for yourself have just as much value. But even if you go with a more traditional route, it’s usually easiest to join a company through a popular language.

So learn your craft. Do your own projects. Build up experience.

Start their own company

Most of the top tech firms started off in a garage. Whether it’s an indie gaming developer or a niche app which fills a gap in the market. Just think of how Elon Musk made millions when he sold PayPal. Or how Bill Gates created Microsoft. All these legendary figures had one thing in common: they knew how to program.