Everything you should know about the Dojo

You've Got Questions? We've Got Answers. 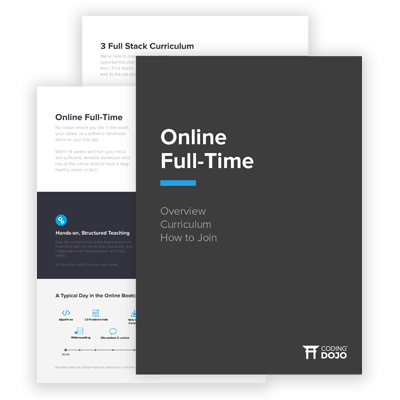 See all your course and curriculum options

Check your inbox for reservation confirmation.

Our staff looks forward to meeting you!

Our course packet will soon be in your email inbox.

Your Course Packet is on its way

You're International! We have a special admissions process for you.

Please email admissions@codingdojo.com to connect with our admissions team.

Please provide your name, program of interest, and how you intend on financing your bootcamp.

In the meantime, you’re also free to join our next Open House

to learn more about Coding Dojo.

Join The Open House Back

Sorry! We don’t serve your state

Unfortunately we don't offer courses to residents of your area at this time.

In the meantime, you’re also free to join our next Open House

to learn more about Coding Dojo.

Join The Open House Back

By submitting this form, you agree to receive admissions and marketing communications via email or automated text, and you agree to our Privacy Policy and Site Terms. *Salary information is based on survey results gathered from all Coding Dojo alumni in December 2020. **Job placement data is based on a 2020 student outcomes report.