Tech jobs are booming. After a slight slowdown in 2020 due to the COVID-19 pandemic, companies are hiring for tech-based roles at rates never seen before. While across the board, demand for tech jobs is high and that’s not expected to change, some job demand is more than others.

On top of high demand and comparatively high entry-level salaries, many people may not know that these tech jobs don’t require a degree or traditional education path. Anyone can become qualified for them simply by attending a bootcamp, whether it’s in coding, cybersecurity, or data science.

With that in mind, we wanted to find out which tech jobs are the most in demand for this year. To do this, we first had to define what a tech job actually is. For our definition, we followed the categorization put out by Best Colleges.

By considering the definition as something that is strictly role based—someone who is a technician and works on building and maintaining hardware, software, and other forms of tech development—this left off roles that exist in a tech ecosystem or simply are at a tech company, including people managers, data analysts, content production, finance, and so on.

Now that we have our definition, how did we figure out the list? We took a look at Glassdoor’s 50 Best Jobs in America for 2022 list and took the ranking of each job that falls under our definition of a tech job. From there, we counted the current number of Indeed job listings and the projected growth rate given to each role by the United States Bureau of Labor Statistics. Each number was then scaled and standardized and added up to complete our top 10 list. 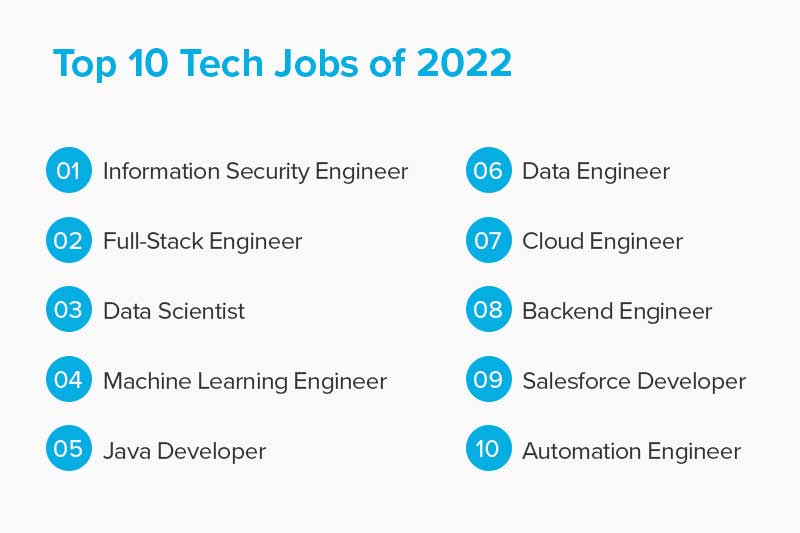 Among all of the tech fields that are growing, none are growing faster than cybersecurity. The U.S. Bureau of Labor Statistics estimates that the industry will grow 33 percent within the next decade. That is much higher than the national average and higher than every other career on this list by far.

To be an information security engineer, you should have knowledge of Linux, UNIX, and Java systems, as well as knowledge of software writing, SSL, SSH, and SIEM systems.

Looking to enter the promising and ever-growing world of cybersecurity? Check out Coding Dojo’s cybersecurity bootcamp.

No. 2 on our list will come as little surprise for those who have been following the tech world over the last decade. While software and web developers are always in-demand, it’s clear that employers prefer to hire the most well-rounded coders they can.

That’s why, when learning to code, you should do all you can to learn multiple stacks instead of just one. While some engineering roles are separated by individual stacks, companies are looking for developers who can be flexible and cover different stacks when needed.

Whether you’re a new coder just starting out or you’ve been programming for years but just know frontend or backend, now is the perfect time to start learning more stacks to increase your career and income potential.

Fortunately, Coding Dojo’s four coding bootcamps give you the option to learn more or start as a full-stack engineer right out of the box.

Rounding out the top three on our list is a relatively new role as far as tech jobs go: data science. The fact that the top three positions exist in different fields and require different skills further underscores the depth and breadth of opportunity the tech industry offers as a whole.

Data science is in its relative infancy and has no end to its possibilities as machine learning and artificial intelligence continue to be improved. In the early days, data scientists were largely expected to collect, organize, and display or present data. Today’s data scientists do all that plus use machine learning to analyze multiple different business decisions for companies.

Naturally, this makes it an incredibly beneficial and in-demand position for companies in a variety of industries. Those hired to work entry-level data scientist jobs can expect to earn just under $90,000 with future earnings going well above that depending on titles.

Best of all, data science is something you can learn without a degree at Coding Dojo’s 16-week data science bootcamp.

While many roles on this list can be considered entry-level, a machine learning engineer bucks that trend as one of the few senior positions with as much demand as others. Few tech avenues can claim so many available jobs so late in a career path.

As we move down the list, many of the jobs become more specific in their purview. Naturally, jobs in the top spots are more broad, but it speaks to the sheer demand of tech jobs that very specific roles like Java developer are in the top five.

Even after decades as one of the top web developer programming languages, Java still reigns supreme. That’s evidenced by Java topping our 2022 list of the most-in demand programming languages. Naturally, that demand carries over to this list.
According to Salary.com, the median salary for a Java developer in the United States is $114,000, making it a great option for many. The best part? If you start your coding career as a well-rounded, full-stack developer, you’ll have Java in your toolbelt already.

Sensing a pattern here? Jobs in data are highly in demand and have no prospect of cooling off anytime soon. Data engineer is the third data-specific role to crack the top 10 list.

The average data engineer salary in the U.S. is $115,000 according to Glassdoor, representing another well-paying job to make the list.

No. 7 on our list is cloud engineer, a role that will become increasingly prevalent as cloud-based systems and computing continue to dominate the tech space. Not long ago the cloud was a mystifying idea to many Americans, but today it’s used almost everywhere and companies will need the engineers to support it.

What does an engineer need to know to become a cloud engineer? Most companies use Linux for cloud development, so that’s a must. Ideal programming languages for a cloud engineer to know include MySQL, SWL, Java, Python, and plenty more. A knowledge of AWS is also very helpful.

According to Glassdoor, the average salary for a cloud engineer in the U.S. is $118,000.

If you’re hoping to graduate from a coding bootcamp, you’ll have the necessary skills to become a backend engineer. Like mentioned above, companies are looking for well-rounded coders, but that doesn’t mean they don’t have specific engineering roles depending on the technology or industry.

Backend engineers spend their time in the nuts and bolts of a website or software, whether they’re building a new product from scratch or improving a legacy software, backend engineers are some of the most coveted computer programmers out there.

The median pay for a backend engineer in the U.S. is $133,000, with plenty of roles paying over $200,000. Once again, it’s important to start as a well-rounded engineer who knows multiple stacks, not just know the backend and expecting to become a backend engineer right away.

A Salesforce engineer will help companies build and improve Salesforce to specifically tailor it to their CRM needs. They can help integrate third-party apps and fix any bugs that will inevitably pop up. To become a Salesforce engineer, you should have knowledge of Java or C#, while there’s also a special Salesforce language called Apex.

Unsurprisingly, a highly specific role with so much demand comes with a high median salary: $115,000 nationwide.

The future of quality assurance (QA) in tech is automation. No. 10 on our list is the role of an automation engineer, who works across engineering teams to find problems and issues and fixes them through automation.

An automation engineer will look across a company’s engineering structure to find opportunities for automation, while also continuing to QA new tech shipments and upgrades. Automation engineers should have some knowledge of an automation testing software, some of which include LambdaTest, Rainforest, and Cypress.

On average, automation engineers make just over $100,000. If you’re already a QA engineer, it’s important to pick up some automation knowledge so you’re not left behind as the role changes.

To figure out the 10 most in-demand tech jobs of 2022, Coding Dojo defined a tech job as someone who is a technician in their role while supporting, building, or maintaining software, websites, or other computer programs. Each job was given a score based on their ranking from these sources:

From there, each score was scaled based on the range of each category and all three scores were totaled up for each role to give us our top list.