We’re always staying on the pulse of the software development industry so that we can better prepare our students for the rapidly-changing technology job market. Many of our students, and developers in general, are interested in working at top startups and tech companies. So, we did some research into just what it takes to work for these companies.

For this study, we focused on the top 25 “unicorn” companies, meaning companies that are privately held and valued at more than $1 billion. Data for this report was drawn from Indeed.com, CB Insights, PitchBook, and Stackshare.

Our research definitely turned up some interesting results, like the popularity of Kotlin and Go, but more importantly it gives developers a roadmap for what skills and languages they need to learn to get hired at their dream company. Whether you choose to attend one of our ten campuses around the country or online, Coding Dojo can prepare you to get a job at some of the most innovative companies in the world.

Without further adieu, let’s dig into the data! 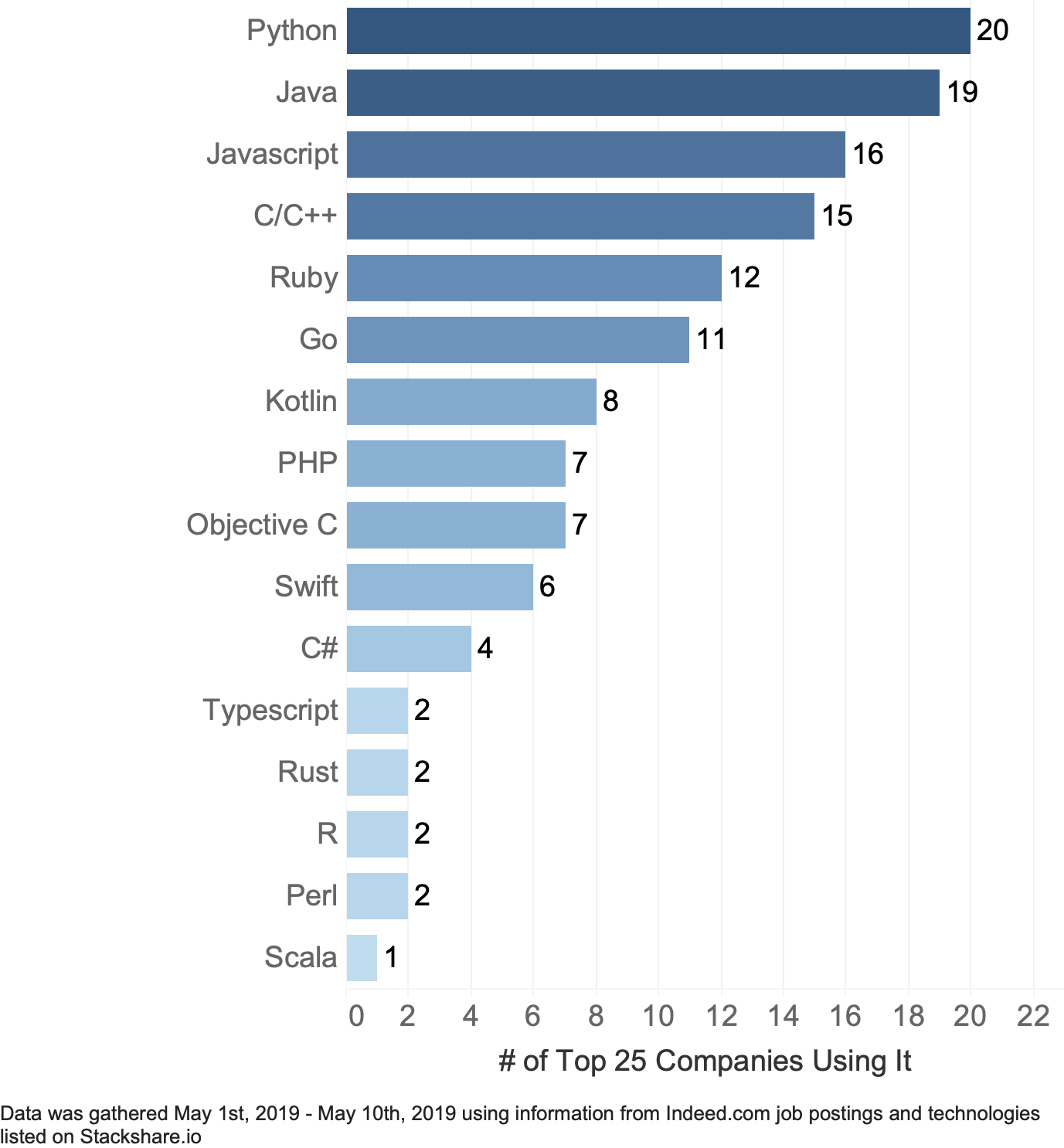 It’s no surprise to see Python, Java, and Javascript as the top three languages as they also topped our recent Most In-Demand Programming Languages of 2019 report. What was surprising is to see Go and Kotlin used by so many companies. Go only ranks 15th in the TIOBE Index ranking of top programming languages overall and Kotlin is ranked #40.

For background, Go (also called Golang) was developed by Google employees in 2009 and is used in Docker, Kubernetes and Ethereum. It has been growing steadily in popularity in the last few years. Additionally,  Kotlin is a streamlined alternative to Java used mainly for Android development and Google added support for Kotlin on Android in 2017, which made it the third supported language after C++ and Java.

Here’s what our Director of West Coast Campus Operations Donovan An had to say:

While most of these programming languages and technologies will be familiar to any working developer, individuals looking to work at these unicorn companies would do well to learn them. We revise our curriculum regularly to ensure we’re teaching students the most in-demand technologies in the market today, and this research will absolutely factor into those decisions. 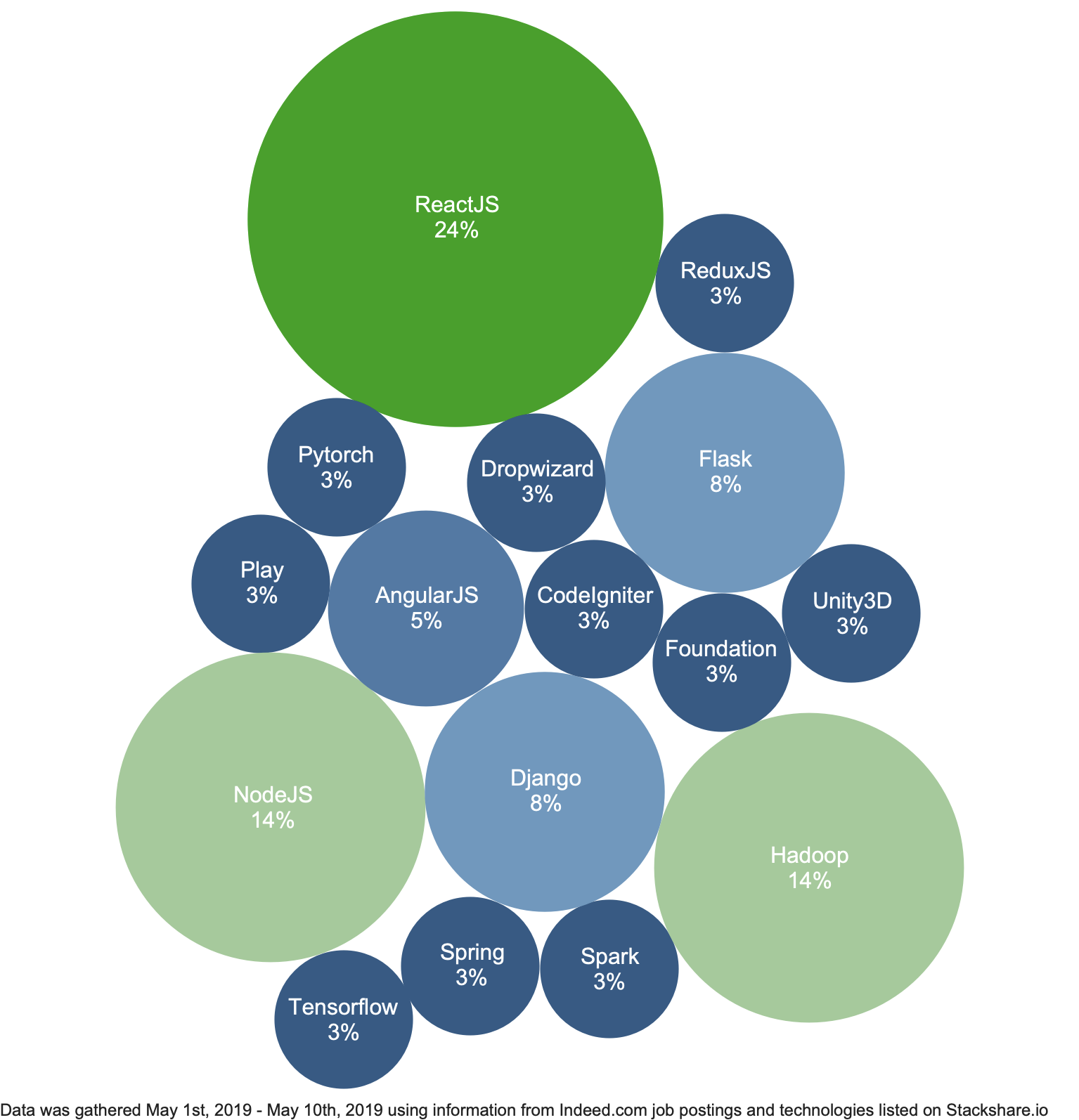 ReactJS topped the leaderboard as the framework most used by the top 25 unicorn companies. If you’re not familiar, ReactJS is a JavaScript library managed and maintained by Facebook and a large community of developers and companies. It creates interactive user interfaces which are suitable for single-page apps and mobile apps. Also, it utilizes data and permits changes even without page reload.

NodeJS and Hadoop tied for the second most-used framework at 14% each. Node.js is a platform for writing server-side JavaScript applications and is built on top of the V8 JavaScript runtime. It utilizes an event-driven, non-blocking I/O model, and it can handle tens of thousands of connections. Meanwhile, Apache Hadoop is a collection of open-source software utilities that facilitate using a network of many computers to solve problems involving massive amounts of data and computation.

Additionally, Django, Flask, and PyTorch are all Python frameworks, which indicates a rise in Python usage. Python is very general purpose, which means it can be used for web development, scripting, software, and much more. These days, we see Python being used a lot for Data Science, which is revolutionizing the tech industry. So it makes sense that Python is being used more and more.

The number of languages used at each of the top 25 unicorn companies was a pretty even spread from 2-10. Not a single company used fewer than two languages and most used between three and six languages, which shows that well-rounded developers will be in higher demand than specialists.

Coinbase and Doordash each use 10 different languages, which is a testament to the wide-reaching goals and innovation the two companies are pursuing. 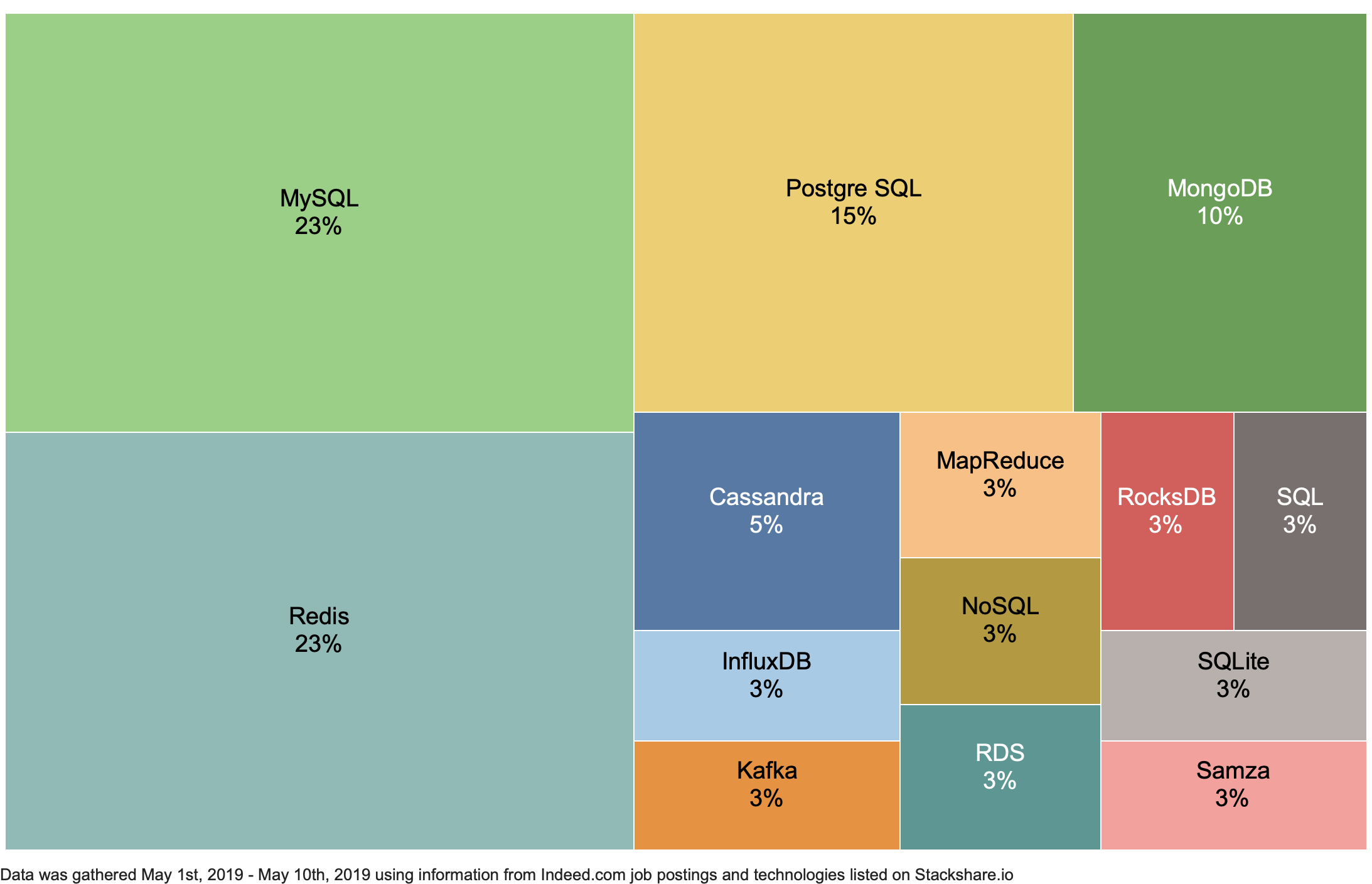 MySQL, PostgreSQL, Redis and SQLite are all very standard SQL databases. We have been seeing more NoSQL – which actually stands for “Not only SQL”. NoSQL databases, such as MongoDB, are great for working with large sets of data. While relationships can be built between these data sets, NoSQL databases are typically used for non-relational use cases, such as mass data consumption and data scraping. 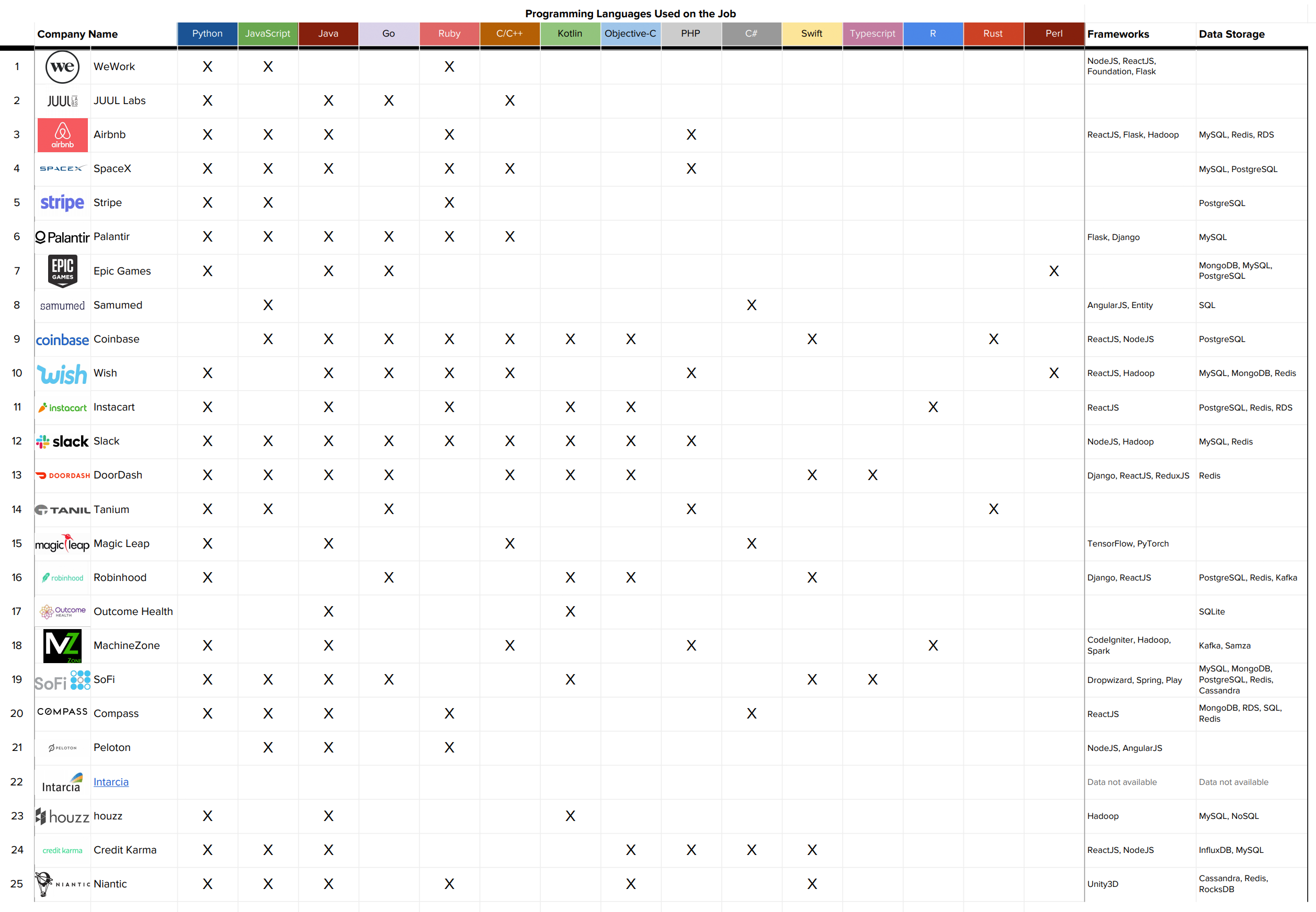 Do you have your eye on a job at a specific unicorn company? Click the chart above to figure out which technologies to master before you apply!