Aspiring developers need to know what languages to learn; they need to select the right education and work on a skill set that will impress future employers and land their dream job. So what are the top programming languages? And what is the best one to learn? We’ve compiled a list for you that highlights the most in-demand programming languages based off current job postings on the market.

Here are the Top 7 programming languages with most job posting on Indeed as of January 2019:

Compared this year’s January data to the data we collected last January 2018, on this same topic, job postings are on the rise as a whole. The ranking, however, did not change. Java is still on top, followed closely by Python — yet, it’s clear Python is on the rise. Javascript and C++ are neck and neck for third place, with Javascript only a few hundred postings ahead.

This year Java grew by around 6% compared to last January, which was right around 62,000 job postings at the time. Java is just about to celebrate its 24-year birthday, and as a programming language, it has definitely stood the test of time. Java was developed by a Canadian computer scientist that used to work with Sun Microsystems, James Gosling. It’s a language that lets developers “write once, run everywhere,” (WORA), which mean its compiled code, also known as , can run on almost any platform without recompilation.

Python is often described as simple and easy to learn, with a readable syntax that decreases the cost and time of program maintenance. This year, Python is skyrocketing with an increase of about 24% with 61,000 job postings compared to last year’s 46,000.

JavaScript is an object-based programming language created by an American technologist, Brendan Eich, and was inspired by Java. Unlike Java, JavaScript doesn’t create stand-alone apps or applets, it can only run on browsers and make them interactive. It can also change and update both HTML and CSS.

One of the advantages of using JavaScript is its speed. It runs immediately within the browser, and it also doesn’t need to be compiled on the client side. This year, JavaScript’s job posting didn’t change much at all, yet it’s still in the top three listings!

C++ was designed as an enhanced version of the C language by Bjarne Stroustrup, a Danish computer scientist. Its four-year development started way back in 1979 and was released in 1983. C++ is usually used for game development, drivers, client-server applications, system/application software, and embedded firmware. This year, C++ grew in popularity by 16.22% compared to last year with almost 37,000 job postings.

C# is a Microsoft programming language and is a hybrid of C++ and C languages. It lets developers build secure applications such as XML Web services, client-server, Windows client and database applications that run on the .NET Framework. C#’s job postings didn’t grow that much over the year, but it’s still one of the most popular languages.

PHP or Hypertext Preprocessor is created by Rasmus Lerdorf, a Danish-Canadian programmer. It’s an open source general-purpose scripting language for web development and can be embedded into HTML code from the server side execution. It’s commonly used to draw data out of a database on web pages. PHP’s job postings increased by 2,000 compared to last year.

PERL’s first appearance was in 1987, designed by an American computer programmer, Larry Wall. Wikipedia says it’s a “family of two high-level general-purpose, interpreted, dynamic programming languages, Perl 5 and Perl 6.” Perl’s popularity didn’t increase this year but is still one of the most popular programming languages to learn.

Below are the top 20 most popular programming languages as of February 2019.

TIOBE calculates the rating of a programming language based on the number of hits on popular search engines such as Google, , Yahoo, Wikipedia, Amazon, Baidu, and Bing. They also consider the number of courses offered, third-party vendors and the number of skilled engineers worldwide. https://tiobe.com/tiobe-index/

One exciting prediction TIOBE made is that Kotlin, a statically typed, cross-platform, general-purpose programming language, currently at #31, can enter the top 20 because of its fast adoption in the industrial mobile app market. This prediction only shows that the tech industry is moving faster than it has ever been and if we don’t keep up, we would be left behind.

Coding Dojo is more than just a 14-week that offers three full stacks. We transform lives, support veterans with access to the GI Bill, fulfill dreams and open doors of opportunities to aspiring and dedicated developers through programming literacy and technical skill empowerment. 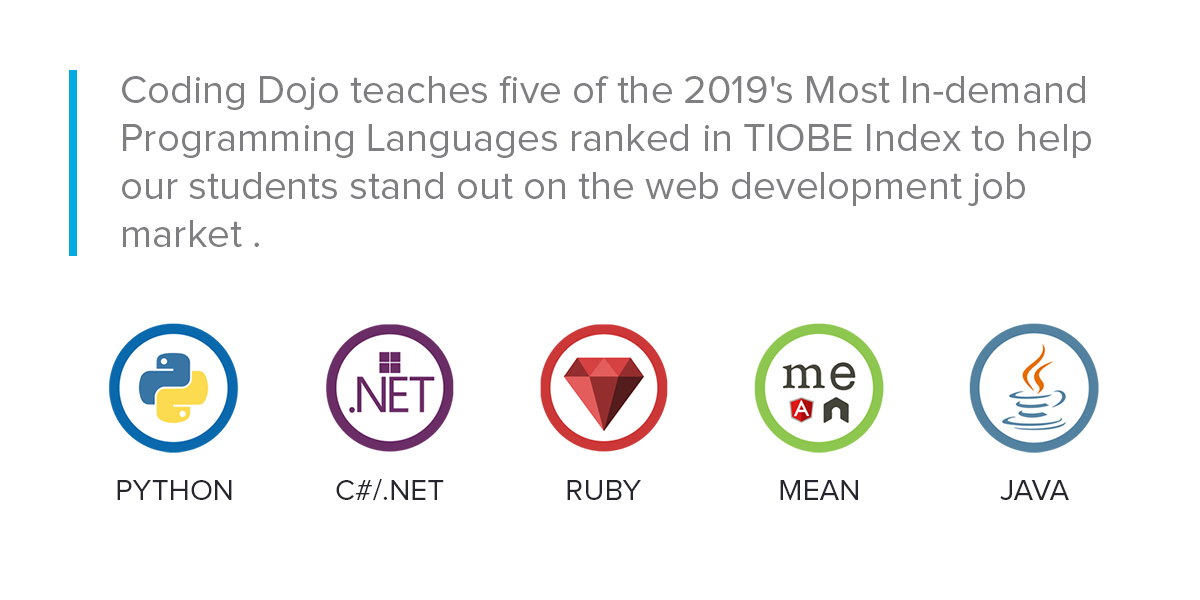 One of our guiding principles is to fill the skill gap in the tech industry by creating a pool of talented and self-sufficient developers. “We don’t just look at what are the languages people want to learn—the demand side—but also the companies need—the supply side[It is because] the language that was really popular five years ago [won’t be as popular in the future]”, said Michael Choi, CEO of Coding Dojo.

With that in mind, we strategically build our campuses metropolitan areas, on tech-hubs as well as on local communities where the need for coding schools or is high. Our primary goal is not just to give people access to quality to help them land a good job and have a better career whether they’re career shifters, job hunters or new developers.

For the past 12 years, Coding Dojo’s curriculum has been refined and fine-tuned. We teach people how to code and help them achieve their full potential by providing our students with the necessary tools to update their skill sets. Apart from that, we deliver excellent instruction and render outstanding service to produce skilled developers who are ready for that next challenge.

If you’re interested in learning more about web development or wanting to become a developer, visit our website: www.codingdojo.com. Join us and become part of our growing community!