“The improvement of understanding is for two ends: first, our own increase of knowledge; secondly, to enable us to deliver that knowledge to others.”

What is Full-Stack Development?

What do you need to know to become a full-stack developer?

A full stack developer is a person who is comfortable working in the front-end and back-end side of web development. It does not mean you have mastered everything about web development; it means that you can work on both the front-end and back-end, with minimal assistance. It’s no wonder that employers look for full stack developers. Finding a job in the tech industry can be easy if you have the skill requirement. The more skill you have, the more valuable you become.

Hoe many coding languages are there?

Fact 3: There are at least 710 coding languages around the world.

Surprisingly, we have lots of programming languages in existence, both those in current use and obsolete ones. Knowing more than one programming language is better, but without an in-depth understanding of their concepts and application, it’s useless. Therefore, you should know the languages that will be required for your stack.

To master the concepts of full stack development, you need to understand its technical foundations and complex frameworks. Spending more time to explore different programming languages can hone your skills, speed up your learning progress and solidify your reputation. We cannot conclude that if you spend ten years of your life studying full stack development, you’ll become a proficient full stack developer afterward. In reality, you can achieve the status if you absorb all you’ve learned, apply them impeccably and create your mark in the web industry through excellent works and contributions. Remember, time, focus, willingness to learn and perseverance matters.

In 2016, Michael Choi, CEO of Coding Dojo and CEO and Founder of Village88, Inc. shared some astounding things he has witnessed over the years when it comes to a developer’s learning progression.

1. It’s not possible to tell whether someone is going to end up being a great developer from the start.
2. Anyone can learn how to code, although don’t expect linear progress.

Regardless of the student’s level of aptitude starting out, the success to master one or multiple programming languages depends on oneself. In Coding Dojo, we believe that anyone can learn to code at their own pace with the right teachers, attitude, and learning environment.

What is web development?

Fact 4: The term “web development” was popularized by Tim O’Reilly and Dale Dougherty in late 2004. It was initially coined by Darcy DiNucci in 1999.

Web development is like a big tree with many branches, and each branch can bear fruit. In full stack development, those relationships are interconnected. Therefore, being a three full-stack developer gives you a wide range of job opportunities and experiences.

How many types of web developers are there?

Fact 5: There are 19 Kinds of Developers

In the digital age where innovation and technology are top-priority, coding is an indispensable skill. It has many benefits to various careers and disciplines. As a hobby, it’s fun and entertaining. Also, it’s for everyone, whether you’re a grade schooler, a working parent or a retiree with a diverse background.

How many web developers are there?

Fact 6: Accroding to Evan Data Group, today, there are over 23 million developers around the world, and by 2023 it would reach 27.7 million.

There are many reasons why the number of web developers keeps on increasing worldwide: passion, interest/hobby, vocation, career advancement, career change, challenge, innovation and to complete the list—money. Forbes released an article about the 2,208 billionaires who worth more than $9.1 trillion collectively. Out of 2018’s Top 10 World’s Billionaires, four are tech giant CEOs/founders namely #1 Jeff Bezos, #2 Bill Gates, #5 Mark Zuckerberg, and 10# Larry Ellison. Their success in the tech industry inspires many people; to learn programming languages, to invest money and time on web development and to create new things out of codes.

What is the demand for web developers?

Fact 7: By 2024 web developer job growth is expected to increase by 27%.- U.S. Bureau of Labor Statistics 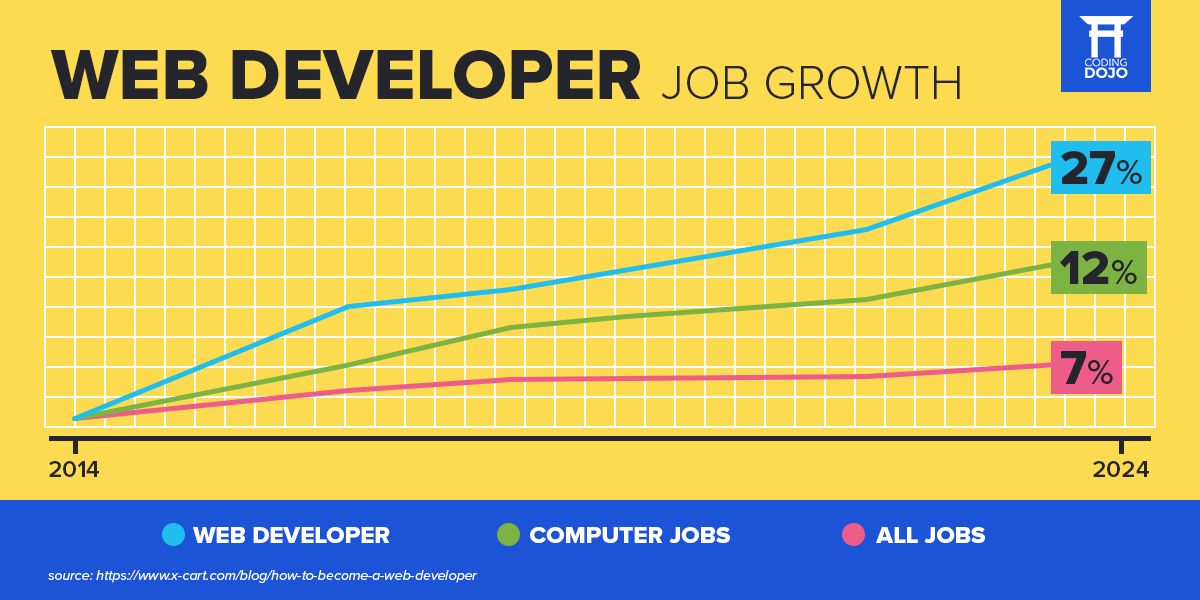 It’s good news for Computer Science (CS) and Bootcamp graduates. No wonder many coding bootcamps were established for the last 10 years. In fact, there were 91 recognized, full-time bootcamps with an estimated 18,000 graduates, according to the 2016 Coding Bootcamp Directory of Course Report. And it keeps on growing and thriving in response to the need of global e-commerce industry. Although the Course Report found that 30% of coding bootcamp graduates did not have four-year degrees, still 80% of them found employment in jobs that require technical skills.

Fact 8: Full stack development is one of the most in-demand jobs in the past years.

What is a full-stack developer salary?

Fact 9: A Full stack developer salary is as high as its demand in the job market.

Why should you become a full-stack developer?

Fact 10: A Full stack developer has many advantages.

Front-end and Back-end development are two essential skills in the tech industry, and to know both of them would give you a bigger advantage in your career. You might ask, “why should I need to learn back-end development when I already have a successful career in front-end development?” or vice versa.

Here are some of the advantages and benefits of a full stack developer:

Instead of hiring multiple developers, some companies prefer developers who can multitask. There’s a saying, “two is better than one.” So when you know both front-end and back-end, there’s a higher chance and more opportunity to land a job in the tech industry. And based on the project requirement, you can easily switch between back-end and front-end development.

As stated in the Indeed report above, the salary of a full stack developer is higher compared to a front-end developer, and back-end developer. In addition, the more languages you know, the easier for you to learn new ones that can upgrade your skill sets—which will give you more employment opportunities.

Learning one full stack is already a huge advantage. How much more if you can learn three full stacks? You might think, “is that even possible?” The answer is a big “YES!” If there’s “two is better than one,” there’s also “the more, the merrier.” That’s why Coding Dojo offers three full stacks. And it is the only coding bootcamp that teaches three full stacks in just 14 weeks!