Home >All Posts>How to Become a Coder at Netflix

Who doesn’t hope to become a coder at Netflix? Considering Netflix was a huge factor in how we watch television and movies, it’s frequently one of the most envied tech companies. Plus, over the last dozen years the company has become part-production studio part-tech company.

Well, let’s look at their business and see what it takes and where the roles are.

As always, newer generations are entering the job market. With some of the largest tech companies being relatively new, it’s possible new graduates aren’t aware of their history. In fact, well bootcamp graduates tend to skew older than recent computer science graduates, it’s very possible many haven’t heard of Blockbuster, and thus aren’t aware of why Netflix was founded.

Back in 1997, Marc Randolph and Reed Hastings founded Netflix. as a company that rented DVDs to people through the mail. Subscribers would add moves to their queue and Netflix would send them to them to the user, who would then mail back the DVD when they were done.

At the time, it was an alternative to visiting a physical movie rental location like Blockbuster or Family Video. What Netflix saw that Blockbuster didn’t was the streaming would be the next revolution in entertainment.  In 2007, Netflix launched their streaming service and entered an era of historic growth to become the most recognizable brands in the world.

In 2013, the company began producing their own content; starting with bingeable shows like Orange is the New Black and House of Cards, and continuing onto movies and documentaries to become their current form, a streaming service and production studio.

In 2019, the company made $20.156 billion and grow to a total of 8,600 employees. While that growth has slowed, then increased during the early stages of the pandemic, and then stalled again, Netflix remains a major company and an idyllic place to work for many.

But, while Netflix is one of the biggest brand names in the world, it’s a relatively small company compared to others like Google and Apple. That makes it much harder to find a job, but they need to hire, so maybe their next will be you.

Netflix doesn’t have many job openings compared to other companies with similar revenues. In spring 2022, Netflix had approximately 230 jobs on their careers page across all teams and all countries they operate in. Just 19 of those were for programming or machine learning.

The best team to look at is their core engineering team. Other similar teams start to stray away from traditional programming and dabble in other aspects of networking and computing.

It’s the safe to say, competition for Netflix software engineer jobs is fierce. You’re likely not going to get a job at Netflix right after graduating from college or a bootcamp, but if you’re confident in your skills, you should try as often and as early as possible.

While Los Gatos has traditionally been their software engineering hub, the realities of COVID-19 and tech’s new approach of working means all Netflix software engineer jobs in the U.S. are open at their Los Gatos office and remotely. 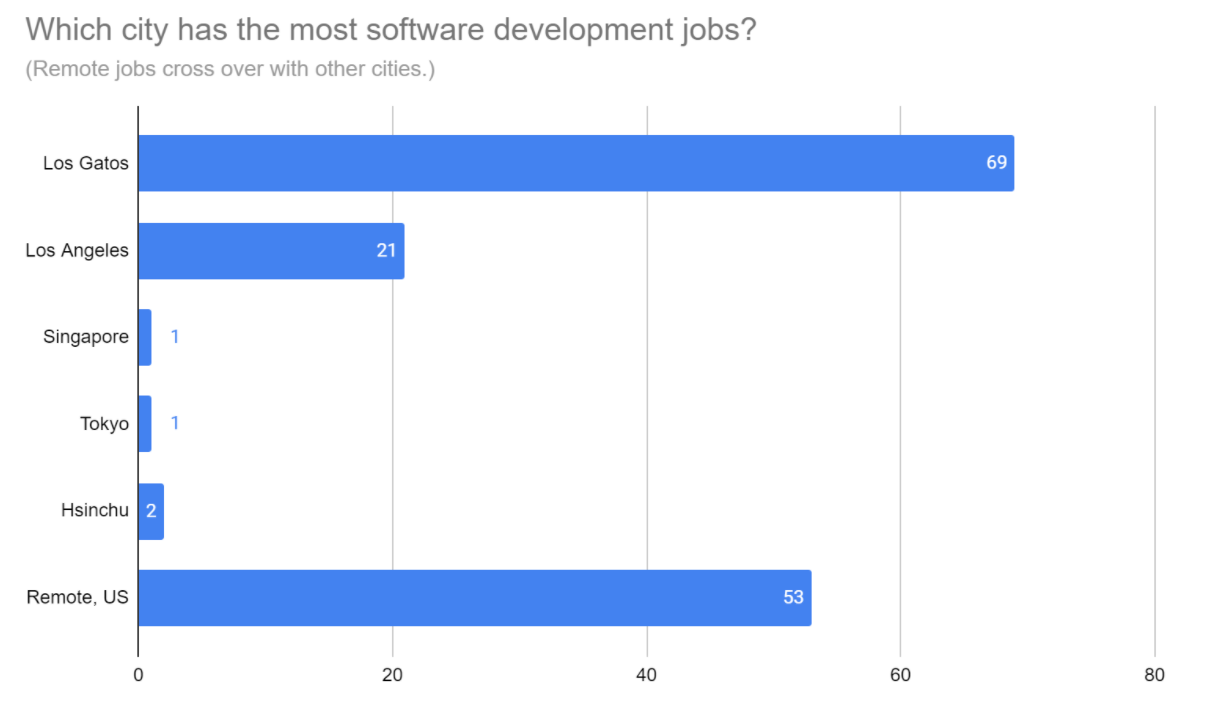 That means gone are the days of Netflix coders having to live in California. If you’re hoping to live on the East Coast, in Chicago, or anywhere with a lower tax hit, you can now get that how lucrative coding job at Netflix. At the moment, there are no international Netflix software engineer jobs, but they do open up periodically.

What are the big trends Netflix looks for?

When looking through the job roles, there are a few trends that stand out. Unsurprisingly, a lot of it is to do with streaming, compression, and codecs. But they also want to make sure you’re familiar with embedded systems and graphics, as well as Linux system-level programming.

Let’s have a look at a few of the key ones.

A video codec is how a computer compresses a massive video file into a much smaller one. Some compression techniques can lose quality, while others use clever algorithms so that the user can unpack the compressed file back to the original size on their end.

Knowing the advantages and disadvantages of the codecs used will be essential to become a coder at Netflix. So make sure you know all about them.

It’s not just about the videos. Users need to be able to pick and choose which videos they want to watch. So knowing how to create a user interface from a design will be essential.

Lastly, they have a lot of content. Think of all those TV shows, movies, and anime that they have on their servers. You’ll need to know how to use those databases and work with them in a variety of ways. So make sure you understand the principles of good database design before you head into your technical interview.

What skill will you need to become a coder at Netflix?

Aside from the trends, there were also more specific skills that they wanted from their developers. Firstly, they wanted experience in four different programming languages:

It’s also really important to make sure you’re familiar with their continuous delivery platform: Spinnaker. This is basically a way to roll out changes to a large number of servers at once. And it seems to be a key piece of software that they use.

Lastly, make sure you have a good understanding of SDKs. Whether that’s using them or creating them from scratch.

Their hiring process is pretty typical. And you can search for jobs on their career page. You’ll likely have a phone interview and then a face-to-face interview, where you’ll need to answer technical questions and solve a programming problem.

It’s worth noting that their problems aren’t particularly tricky – they say themselves. Apparently, they’re really looking for how you solve it, rather than the answer itself. So it’s good practice to solve problems with data structures and algorithms before you go along.

The rest of their interview questions seem to be rather typical: around culture, challenges, and critique.

Give yourself the best chance

Need to amp up that CV? . Whether you’re just starting out in coding, or are looking to add another language or stack to your resume you can get practical advice on real projects at our coding bootcamps.

In 14 weeks, you’ll learn three full languages and get to practice your own projects. So if your CV needs a little flavor or you just want to make sure you’ve covered all the bases,