In 2011, I was a partner at the 33rd fastest growing company in America and the 3rd fastest growing tech company. The company was flourishing, but I couldn’t find affordable and qualified developer talent to keep pace with our growth. There was a major gap between what computer science majors were being taught in the classroom and what they were capable of upon graduation. So, can anyone really learn how to program?

In one instance I hired a “developer” with a freshly minted masters in computer science, paid them $120,000 base, only to retrain them. I racked my brain trying to figure out where we could find effective and affordable developer talent, and that’s when I had an epiphany of sorts—start an internal training program that could quickly on-ramp CS grads and junior developers to give them practical programming skills.

After internally training hundreds of developers and seeing their success, I asked myself: “With the right training, is prior programming experience even necessary?”

I decided to test my idea.

Long story short, it took me two years to develop a system that effectively took someone with little to no programming experience and trained them to be a working developer in a matter of months.

Since 2012, I’ve been trying different ways to see how I could improve the system to more efficiently and effectively educate those who are passionate about learning to code, but lack a traditional CS education.
Read on to learn more about some astounding things I’ve witnessed over the years watching people learn to code.

How to learn coding: what you need to know and the lessons I’ve learned

1. It’s not possible to tell whether someone is going to end up being a great developer from the start.

This rings especially true if someone has fewer than a hundred hours of experience working on coding and algorithms. I bring this up because many coding schools test applicants on algorithms and use that as a primary factor in whether or not that applicant gets accepted into the program.

Throughout my career, I’ve trained LAMP, MEAN, Python/Django, iOS and Ruby on Rails to successful tech executives, entrepreneurs, developers with 10-15 years of experience, and CS grads. Also, a large number of those who were completely new to programming.

Naturally, you would guess that developers with 10-15 years of experience, or those with CS degrees, would perform exceedingly better than those who never programmed. This is true during the first 6-7 weeks of our bootcamp where the following general pattern is observed 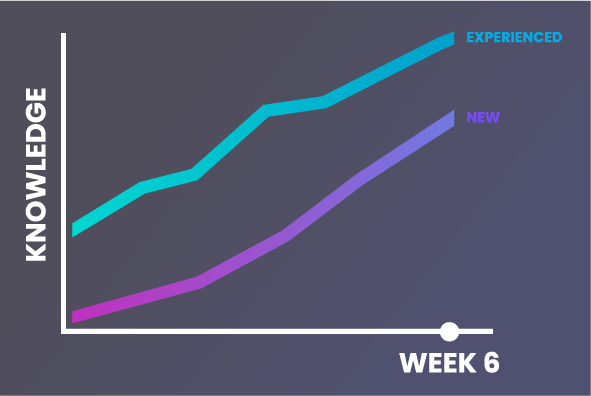 Note, this is the general pattern of my students, each student’s learning journey/progression is unique.

Conversely, I’ve observed that it’s not unusual for students who struggle learning programming concepts in the beginning to start suddenly grasping concepts and becoming really good. They get to the point of keeping pace and working alongside developers with 10-15 years of experience in the field.
This was quite surprising to me, especially when I first started teaching.

Admittedly, when I first started working with some of these students, I was worried whether programming was even a field they should pursue! I questioned whether I should talk to them and see if this is indeed something they want to continue doing, because the risk of failure seemed substantial.
I am glad I didn’t say anything. Many of the “lower” performers ended up being some of my top students, and have gone on to become very successful developers.

Now, the majority of students with zero coding experience do extremely well by the end of our three month program, with some performing as well as the experienced developers who came to the Dojo wanting to retool themselves in a web stack they weren’t familiar with before.

Below is a generic graph to illustrate some of these concepts. 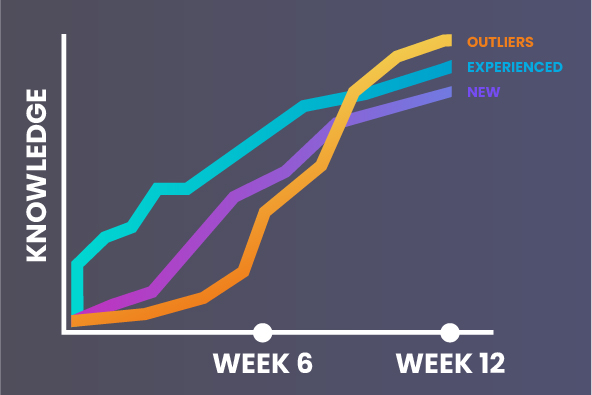 Again, I’m generalizing some data to emphasize certain points and not saying that every coding novice in the beginning does better than those who are experienced in the end.

Now, I’m not saying that those with CS degrees or previous development experience don’t perform as well. Those experiences definitely help, but I’ve come to realize that previous experience does not necessarily correlate to how great of a developer one could be.

2. Anyone can learn how to code, although don’t expect linear progress.

Anyone can learn to code with persistence, the right teachers and optimal learning environment.
While coding can be learned alone by sifting through dozens, if not hundreds, of tutorials, it will take significantly longer. It can also be ineffective since as someone new to coding wouldn’t know what information is relevant.

Here’s an example from my own life.

“When I was 14, I moved to the United States with my family from Korea. Growing up, I studied English for a few years. Yet, when I came to the States, I was unprepared and didn’t know how to speak the language at all! I was frustrated and felt isolated. Although I studied English for a few years, it didn’t prepare me adequately enough when I was placed in an immersive English-speaking environment.
Even though I was studying for many hours, I struggled with keeping up with all the homework assignments, preparing for tests, and establishing friendships. This was extremely difficult, and there were many days where I didn’t feel like any progress was being made in learning to speak English. Even by the end of my first semester, I felt like I wasn’t getting anywhere and had no idea what my peers or teachers were saying.

However, something surprising happened during the summer break. (Keep in mind, I didn’t study much during that time.) Yet, when I arrived back at school I could suddenly understand everything my teachers and peers were saying!

Reflecting back, I had pivotal ‘aha’ moments, where certain concepts just clicked. Practically overnight, I was no longer struggling with the class, and was able to keep pace with my peers.

Learning to code is much the same way as learning a new language. It often consists of several ‘aha’ moments where gains in learning increase substantially. Similarly, learning accelerates when someone is put into an immersive environment.

3. Learning how to code is a work in progress

Another lesson looking back is that when it comes to learning how to code, the growth and progression is definitely not linear where you get incrementally better each day you work/learn.
In fact, it’s more like this: 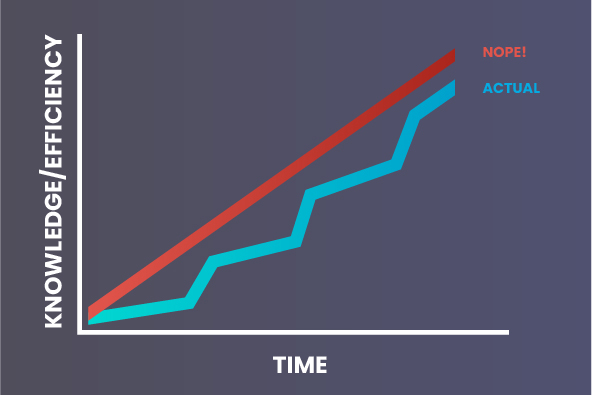 Often times, it may even feel like, despite the work being put in, you’re not getting any better. The key is to keep pursuing your goals and to never give up. Given the persistence and passion, anyone can indeed have an “aha” moment to get them to the next level.

On the other hand, if you don’t stay persistent, and if you’re not really “immersed,” your progression will be stagnant.

Learning how to code: my final thoughts

In summary, based on my experience teaching coding to thousands of programmers, I’ve seen first-hand that anyone can learn to code, regardless of their level of aptitude starting out.

Granted, some may learn faster or reach a higher level of proficiency than others, but with the right teachers and environment, everyone with the passion and dedication to put the hours in can learn to code.

Just because someone is twice as capable as another, doesn’t mean they will always be twice as capable. Often, there are those who seem like bottom performers who then surprise everyone by a suddenly having several “aha” moments, in turn ending up as a top performer.

To learn more about learning how to code, check out Coding Dojo and how they can jumpstart your career in programming