Git is an open source and free distributed version control system (VCS) used for software development.  The primary features that Git offers have seen it soar in popularity as one of the most commonly used VCSs used today.

The importance of using a version control system like Git cannot be stressed enough.  Doing so allows a developer the freedom to experiment and test alterations in his or her code without fear of losing any previous work.  With a VCS, every change that has been made or will be made in the future is meticulously logged and stored, such that any developer on the team can retrieve code or a version of a file from anywhere and at any time down the line.  For a developer, a VCS is like your wallet or car keys: You never leave home without it!

Below we’ll examine the basics with a complete yet brief Git tutorial for beginners who are interested in getting started with a secure version control right away! Don’t feel like reading? You can check out this video tutorial that breaks down Git and Github for you in 7 minutes.

Those four terms should get us through the introduction to Git, but you are encouraged to learn more and explore some of the other common terms.

The Core Features of Git

Git itself provides a handful of benefits that make it superior in many ways to other common VCSs.

Getting started with Git is very simple.  For these examples, we’ll assume basic knowledge of opening a terminal window on your development machine.

From the terminal, navigate to the root directory of your project and enter git init to generate a new Git repository:

As indicated, the entire repository of Git will be stored in the .git subdirectory, which you will never need to interact with directly.

With the repository created, now we need to add some files to be version controlled.  This can be accomplished by adding specific files by name using the git add command:

To save time and effort, you can also add all new or modified files in the working directory at once:

Many commands such as git add will not produce any output, so often it is useful to check the status of the Git repository to determine what Git is preparing to do next, such as which files are waiting to be committed:

Changes to be committed:

This tells us that git is waiting to commit the new file ‘data.xml’ that was added to the repository earlier.

Once a change has been made, it is best practice to commit that change to the repository.  All commitments in Git require a commit message, which is a simple description of the change(s) made by the developer within the commit.

To accomplish this, use: git commit -m “message”:

As you alter your repository, you may wish to view a transaction log of commits that have been made, detailing the author, date, and modifications that occurred, a task easily accomplished the with git log command:

As files throughout the repository are modified relative to versions previously committed, you may wish to view those changes or differences.  The git diff command is a simple way to query those changes.

First let’s change our data.xml file slightly so we have a change or diff to detect:

After modifying a tracked file, we can now run the git diff command to see the changes made since the previous commit:

Remember to commit the latest changes:

As development continues — particularly as new team members are involved — it may be useful to view the person (or author) responsible for a particular change.  This can be accomplished using the git blame [file] command:

Here we see that Bob is responsible for the latest addition to the data.xml file.

While a local Git repository is necessary for tracking your own work and modifications, eventually most workflows will require uploading (pushing) your local changes or commits to a remote repository.  With multiple team members pushing and pulling from this same remote location, the project remains up-to-date for everyone involved.

Now we can safely issue git push commands to commit our local changes to the remote repository.

Pushing to a Remote Repository

After work completes for the day or whenever desired, it is often a good practice to push your local repository and changes therein to a remote repository (such as GitHub) that is accessible by other developers.  You can specify the particular remote repository to push to (by name or url), but typically a standard git push command will suffice:

Pulling from the Remote Repository

When a fellow developer wishes to begin coding in the project, he or she will begin by issuing a git pull command to download all the latest repository information from the remote repository to his or her local repository, ensuring everything is up-to-date:

There’s Plenty More Where That Came From

While we’ve just barely and oh so gently caressed the tip of the iceberg, there are plenty more cool features and commands to learn with Git.  Check out this handy infographic, this simple tutorial video, or even the official Git documentation to really dig deep and get your hands dirty with the glorious version control system that is Git! 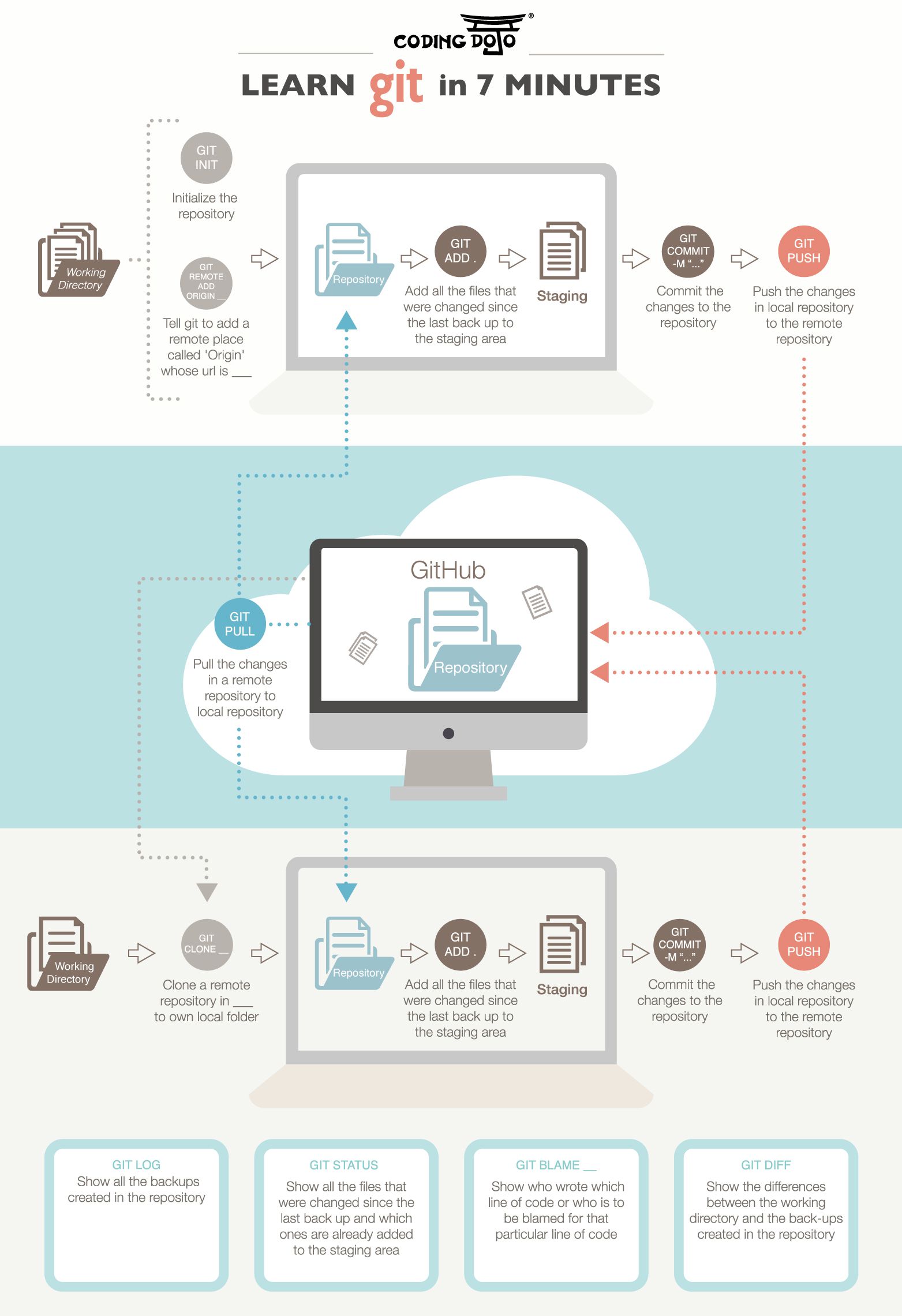