Home >All Posts>How to Become a Coder at Amazon

Ever wondered how to become a coder at Amazon? Companies like Amazon are the ultimate dream job for a lot of people. Big prestigious brands with excellent reputations. But how do you land a job at such a demanding company? How likely is it? And what should you do to prepare?

Let’s dive into everything you’ll need to know to become a coder at Amazon: from a little background to how many software development jobs are available.

Get to Grips with Amazon’s History

Jeff Bezos founded Amazon in 1994 as an online marketplace for books. Soon after, it started selling all sorts of other products online, until it became one of the largest retailers in the world and expanded into software, electronics, streaming, and video. They own brands like Twitch, Whole Food Markets, and even Kuiper Systems.

So it’s no surprise that many programmers and developers flock to them all year round. But exactly how many jobs are there?

Amazon Hires Developers from Across the Globe

As such a large company, with offices in nearly every country, there are thousands of jobs available at any one time. If you hop over to their career website, you’ll see that they’ve got around 26 categories of teams. These include Amazon Web Services, Digital Entertainment, and Operations Technology, as well as things like Human Resources and Marketing.

In November 2020, they had around 26,000 jobs across everything they do. So we thought we’d help you narrow it down to the cities and locations to give you a better idea of where to start looking.

When you go through their website, you can easily break down the jobs by the department you’d like. Most of the jobs won’t be useful, but nearly a quarter of them are for software development. And there are a few other terms that might interest you, too. Here’s a breakdown of what we found. 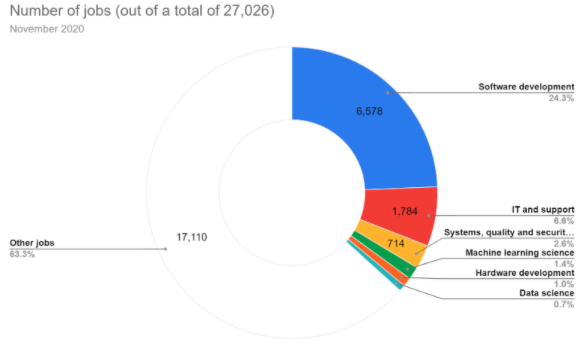 Seattle is Your Best Bet for Amazon Coding Jobs

The United States, England, India and Japan rank best for Amazon jobs. But that’s if you look at everything together. If we break it down a bit more, we can see that – while Seattle is clearly the hub of their work – Canada and India are good locations, too. (And Germany sneaks in at number 14.)

Seattle, though, is clearly the place to go if you’re looking for a software development job at Amazon. It’s not surprising, as that’s where they employ around 45,000 people. Even so, it’s worth noting that Hyderabad, in India, also has a huge campus and can house around 15,000 people. So that’s a location that could see a surge in the future. 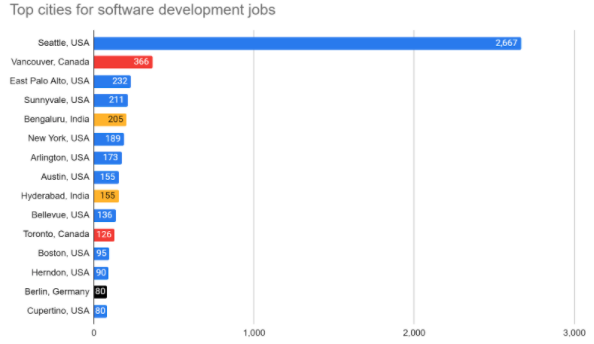 There are Remote Jobs, Too

With the current climate, you might be wondering if you need to move at all. Amazon is one of many companies that’s been adjusting to working from home, but it doesn’t look like they’re going to go completely remote anytime soon. Saying that, there were around 1,247 remote jobs on their website in November. A few of these were for solution architects (356) and software developers (134).

This puts ‘remote working’ on a par with cities like Vancouver or Hyderabad. So it could very well be worth looking into.

What are the Big Trends Amazon is Looking at?

Searching through their job descriptions, we found a few topics that kept cropping up. Obviously, you should always research the individual role you’re applying for, but it can only help to have a good understanding of these trends.

Get to Know Your Way Around Blockchain

If you haven’t heard about cryptocurrency or how the blockchain can revolutionize security, then you might want to start looking into it. Very simply, blockchain is where everybody has a copy of the ‘ledger’ of changes. For currency, that’s all the transactions, for example.

This means it’s nearly impossible to fake a change, as the information is basically backed upon thousands of different computers. You’d need to change every single one at the same time.

And it’s no surprise that Amazon seems interested in the blockchain. Maybe they want it for security reasons internally? Maybe they’re considering taking bitcoin as payment? Who knows? Regardless, it only makes sense that one of the world’s biggest retailers might want to know more about a currency that has the potential to be the worldwide standard. Maybe.

Learn All About Big Data

Big Data is essentially the idea that there are a million different bits of information about people and things, scattered throughout the world. And if you bring all that together, you can make much better predictions or get a much better idea of what’s going on.

A lot of this is about taking data from a huge variety of sources and somehow converting it into a format that one system can understand. Imagine trying to plug a hundred different databases into each other, even ones storing the same kind of data, when there are no standards at all.

Wrap Your Head Around Machine Learning

Call it artificial intelligence. Call it evolving the perfect computer. Call it trial and error. Regardless, it’s when you don’t write the end code. You write a process.

Most end programs stemming from machine learning don’t make sense to the original programmers. They only understand how they wrote the rules. And that’s kind of the point. The idea is to write how the program will teach itself and then let it create itself.

Make Sure You Know Amazon’s Technology Inside Out

If you’re planning to work with a company on the cutting edge of technology, it’s best to understand what they do well. They have a wide range of products, from Alexa to Web Services. So get familiar with it and make sure that you understand what’s going on in each industry. For example, with Alexa, you might want to look into natural language processing and how to capture the meaning of a sentence.

What Skills Do You Need to Work at Amazon?

As we scoured through job applications, we noticed a few skills that regularly reared their head. So it’s worth making sure you’ve got them on your CV.

You can find all of Amazon’s open positions on their career website. It’s also got articles, interview tips, and an explanation about their process on there, too. So it’s worth reading through and making sure you’re up to date.

But in the meantime, the usual process to become a coder at Amazin is the following:

During your interviews, they’re likely to talk to you about topics like data structures, distributed computing, machine learning, and algorithms. These are the areas that they’ll be testing you on and making sure you’re confident. So make sure you do your revision and have a read of the topics they say they’ll talk about.

Want to improve your CV?

If you’re feeling like your CV needs a little more oomph, or you’re looking to learn a different language, it’s possible to get the skills you need in just 14 weeks. You’ll work on real projects and get a chance to really use those coding skills. Start learning three full stacks and level up that CV, just check out our bootcamps.