Home >All Posts>How to become a coder at Facebook

Ask a programmer in the world where they’d like to work, and nine times out of ten they’ll probably say they’d like to become a coder at Facebook. It’s one of the most famous brands on the planet and anybody would bite off their own arm to get to work for them.

But what does it take? And, more importantly, what are they looking for? Let’s look at what you need to know before you start applying and see how to get a software development job at Facebook.

Get to grips with Facebook’s history

It all began in 2004 at Harvard College. Mark Zuckerberg originally created it for students and within about a month, half the students at Harvard had signed up. Later that year, they expanded to other universities until, in 2006, they opened up to everybody.

Since then, it now has fingers in a huge number of pies, like video gaming, instant messaging and virtual reality. And it’s one of the biggest companies in the world, earning around $70 billion in 2019 with about 50,000 employees.

Most jobs are in North America

In November 2020, Facebook was only advertising for 1,855 jobs across their whole business on their own website. Only 192 of those were for software engineering. So it’s evidently a tough company to break into, with very few open positions. Perhaps that’s just the time of year we searched, but it definitely seems sparse compared with the 84,000 software development jobs that are on Indeed right now. 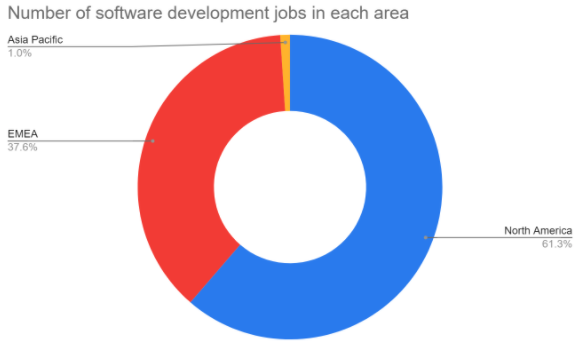 The majority of Facebook’s software engineering jobs are in North America, while Europe seems to be their second-most common place to hire. Not surprising.

It seems California is the best place to go

Unsurprisingly, Menlo Park takes the top spot, with Seattle and New York close behind. But London does manage to break into the top five at fourth place, with a respectable number of jobs considering how many are available. 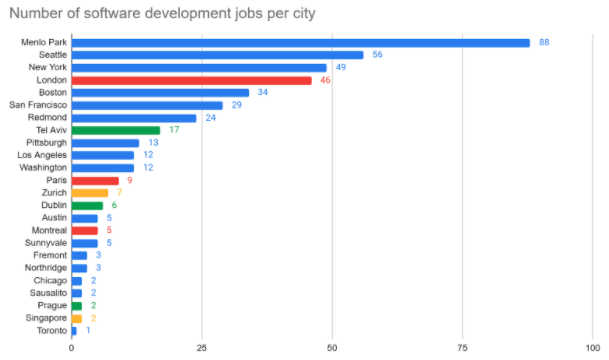 It would seem that if you want to work for Facebook, you either need to live in the United States, London or Tel Aviv. All of which are tech hotspots, so if you don’t manage to land a role at Facebook straight away, at least you’ll have other options.

There aren’t many remote jobs

On their website, there are only a few remote positions available. At least, they’re not explicitly remote. But that might change in the near future. Since the pandemic, Facebook has been allowing people to work from home and it seems that they’re expecting the trend to continue. In fact, they might have half their workforce working from home in the future.

“We’re going to be the most forward-leaning company on remote work at our scale,” Zuckerberg said in an interview with the Verge. “We need to do this in a way that’s thoughtful and responsible, so we’re going to do this in a measured way. But I think that it’s possible that over the next five to 10 years – maybe closer to 10 than five, but somewhere in that range – I think we could get to about half of the company working remotely permanently.”

That’s an impressive and ambitious goal. But it could completely change how you break into the tech giant, since you won’t be so confined. However, it’s worth noting that their FAQ mentions that you’ll need to live in a nearby state, even if it’s remote. (This could be for legal reasons or because they want you to be able to come into the office occasionally.) If you want to learn more, have a read of their FAQ.

Check often, as things could change

At times, we’ve seen cities like Tel Aviv and Singapore get a sudden surge of new positions. Saying that, the ratios do seem to match with their largest offices, so we think it’s a useful gauge.

What are the big trends Facebook is looking at?

While browsing through their job descriptions and career page, we spotted some key trends that kept jumping out at us, like the need to understand Android and iOS operating systems. It’s worth making sure you’re up to date and understand all the trends. You never know, you might be the one who makes the next breakthrough. Here are a few we spotted regularly.

Facebook is one of the companies doing a ton of research on artificial intelligence. So it’s worth making sure you understand the difference between Artificial Narrow Intelligence – where a computer is good at a specific task – and Artificial General Intelligence – which is the aim to get a computer to think through problems at a human level.

This is where you use code to analyze a sentence and figure out what was actually said. It’s a tricky area of programming as human language is full of oddities, like sarcasm. Figuring out what someone means, around all the subtext and non-verbal cues, is quite the challenge. You’ll see this talked about in a variety of ways: NLP, conversational AI, dialogue systems. They all tie into natural language processing.

You likely already know that Facebook owns Oculus and is investing heavily in virtual reality. But you might not know about augmented reality. It’s similar, but rather than completely immersing yourself in the virtual world, you overlay it over the real one.

The technology is very similar, though the trick is making sure it fits in with the real world in a natural way. As the world becomes evermore connected, it’s extremely likely we’ll see more and more augmented reality systems coming out, especially from a company so heavily invested in mobile software.

What skills will you need to become a coder at Facebook?

This tallies with what we’ve found in other businesses and matches the most in-demand languages on Indeed. The only surprise here is Hack, which is a relatively niche language compared to the others.

The other thing they often look for is a Computer Science degree or similar practical experience. This means that if you’re self-taught, it’s worth making sure you get a few more years under your belt with another business before applying. The good news is that it’s not essential to get a Computer Science degree, you’ll just need to work that bit harder to impress.

If you’re looking to become a coder at Facebook, head to their career page. You’ll be able to search by the role you’re looking for and which city you’d like to work in. You should also check out their hiring page to get up to date on exactly how they hire.

But, in a nutshell, it seems to be a three-part process:

Want to improve your chances?

It can never hurt to learn a little more, especially if you can add it to your CV. Whether you’re just starting out or you want to learn a new language, our bootcamp teaches you three full stacks in just 14 weeks. You’ll get practical training and advice as you go along, and we’ll help mentor you in interview techniques and building your resume. Check out the curriculum.