Home >All Posts>How To Dress For A Jr Developer Position

Common wisdom suggests that wearing a suit to an interview is never a bad call – that is, unless you’re interviewing for a developer gig. If you show up at a start-up where the CEO wears a hoodie, and you’re decked out in a suit and tie, you may come across as not being a good cultural fit.

Now, that’s not to say that there’s no thing as a dress code when interviewing for a junior developer job. It may seem like if you’re smart enough, and if the company’s tech is new and “disruptive” enough, it won’t matter what you wear.

If you’re a young kid fresh out of college who shows up to an interview with a Skyrim t-shirt and torn up kicks, you might have a chance – if you can prove that you’re knowledgeable enough. But if you’re interviewing against someone who is willing to take the same pay as you, is just as passionate and educated, and shows up wearing a button-up paired with nice jeans and dress shoes – you may not be scoring as many brownie points as your competition.

Image and first impressions matter, and if you can get the fashion code right, the way you dress for an interview will give you a leg up in the process. So, what is the “right” fashion code when interviewing?

A good rule of thumb is to dress nicely enough to show you made an effort (no statement T-shirts, wrinkled clothes), but not so formally that you make your interview uncomfortable or that you know nothing about their company culture. When in doubt, ask the recruiter or hiring manager what the company’s dress code is, and then kick up your outfit a notch.

One thing to keep in mind – especially if you’re a women – is that you may be asked to write on a whiteboard, so there may be kneeling or reaching up to write code. Wearing a knee-length or shorter skirt is usually a bad idea, and if you’re wearing a button-up shirt make sure that you can move around in it without it gaping or having a button come undone (according to Reddit, this has happened before!). Net, net, make sure you wear something that you’re comfortable in!

Unless the company is formal (law firms, banks, government), it’s usually safe to wear the following to a junior developer interview:

What to wear to a junior developer interview (men & women): 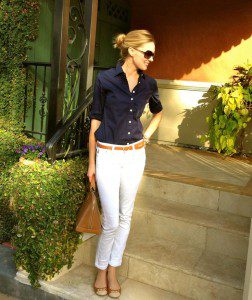 What not to wear  to a junior developer interview (men & women):

If you don’t have anything nice to wear to an interview, don’t stress out about it. You’re most likely not in a position where you can afford the time and money to go out and buy a whole new outfit. Pick the nicest outfit that you can muster up and go for it, and if you really don’t have anything, borrow something from a friend to dapper up your interview attire.