Are you wondering if you should learn Java in 2023? The answer is simple: yes. As the world moves more towards mobile apps and convenience, Java is becoming more and more instrumental as a language. It’s one of the strongest languages we see, ranked third most popular with recruiters in the last two years.

It’s true that during the pandemic, there have been fewer jobs available. But that’s true across the board, and it’s still a highly in-demand language. It’s definitely worth it to learn Java in 2023. And, you can do that at one of Coding Dojo’s three coding bootcamps: online, online accelerated, and online flex depending on what works best for your schedule.

While everyone who’s been online since the 1990s has seen the Java logo, not everyone will know what it is. Java is a programming language invented in 1995 that has grown into one of the most important digital languages, including being used on an estimated 3 billion devices,

Java continues to be a huge player in the software development world. It’s used across every industry you can think of, including banking, IT, and retail, as well as being an important language for Android phones and apps.

So, should you learn Java in 2023? While it’s certainly not on the rise like Python, Java is earmarked to continue to be a major language for software and web development for the foreseeable future. 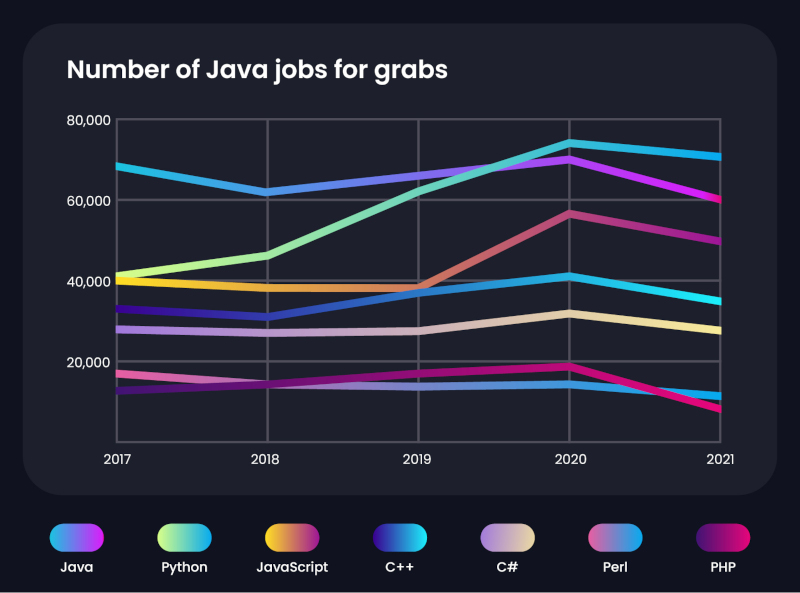 What is Java Used for?

Java s an object-oriented language that is free to use and can run on all platforms, which has been a big asset and the mediums we use to interact with the internet continues to diversify with phones, tablets, and even watches. Java is used for:

Java is built on the foundation of C and C++ but was created with the intention of making things simpler so it’s easier for beginners.

Java Is Friendly for Beginners

As mentioned above, Java is an ideal language for those learning how to code. Java is a great language to help you get on the coding ground floor and navigate your way through the world of software development. Plus, with a relatively high salary, Java is great for entry-level coders to learn as they expand their knowledge into other languages and grow their careers.

Java Is Not Going Anywhere

Over the last few years, Java has held a pretty steady position, always having at least 60,000 jobs available. While Python is a rising star, jumping ahead in the last few years, it hasn’t affected Java’s popularity. There’s a reason that Java is known as the workhorse of the programming world.

And we don’t see this status changing any time soon. We predict that Java will continue to be one of the top three languages for a long time to come.

Java Is a Versatile and Flexible Language

During the pandemic, people have been forced to work from home – when possible. This was a big challenge for companies, as they didn’t necessarily have the systems or equipment in place to allow their employees that flexibility.

Instead of supplying everyone with a new device, many people were forced to work on their own devices: a combination of laptops, mobile phones, and tablets. This was a trend, even before the coronavirus. People were steadily bringing more and more of their own devices into the workplace. And it’ll keep happening.

That’s good news for Java developers. Java is a language designed to work on any operating system: Mac, Windows, or even Android. It’s agnostic. And that makes it incredibly popular with companies looking to develop their internal software, as they need to make sure it’ll work on all their employees’ devices. Safely. Securely. And reliably.

Over the last few years, the number of mobile app downloads has steadily been increasing. In 2020, there were around 150 billion in total. And this is set to rise to nearly 184 billion if Sensor Tower is right.

Businesses want to create their own apps. They want to get their customers on their own platforms, so they can push notifications and market their products. And if people are downloading more and more, then brands will be more incentivized to create their own apps and hop onto that bandwagon. This makes Java programmers particularly attractive, as they’re going to be key to bringing in new customers.

Java developers are paid an average of $99,000 across the U.S. Plenty of entry-level Java developers will see salaries above the $70k mark, but those working in tech hubs or big cities should expect higher pages right off the bat. A Java developer’s salary can go as high as $120,000 in some places, making it a great option if you’re focused on one language.

Java Has a Supportive Community

Since Java has been around since the 90s and its popularity has continued throughout the years, there’s a huge online community of Java developers who are happy to help regardless of your skill level. Check out communities offered by Oracle, JCP.org, and Stack Overflow.

How to Learn Java at Coding Dojo

Our three coding bootcamp options all specialize in teaching students the most in-demand technologies—including Java.

In just a matter of months, you’ll go from coding beginner to ready for entry-level software developer jobs at some of the world’s top companies, including Google, LinkedIn, and T-Mobile.

Once you’ve graduated from our coding bootcamp, you’ll have lifetime support from Coding Dojo’s career services team. They’ll help you build a resume, prep for interviews, and much more.

What are you waiting for?