Home >All Posts>Top 7 Programming Languages Of 2020 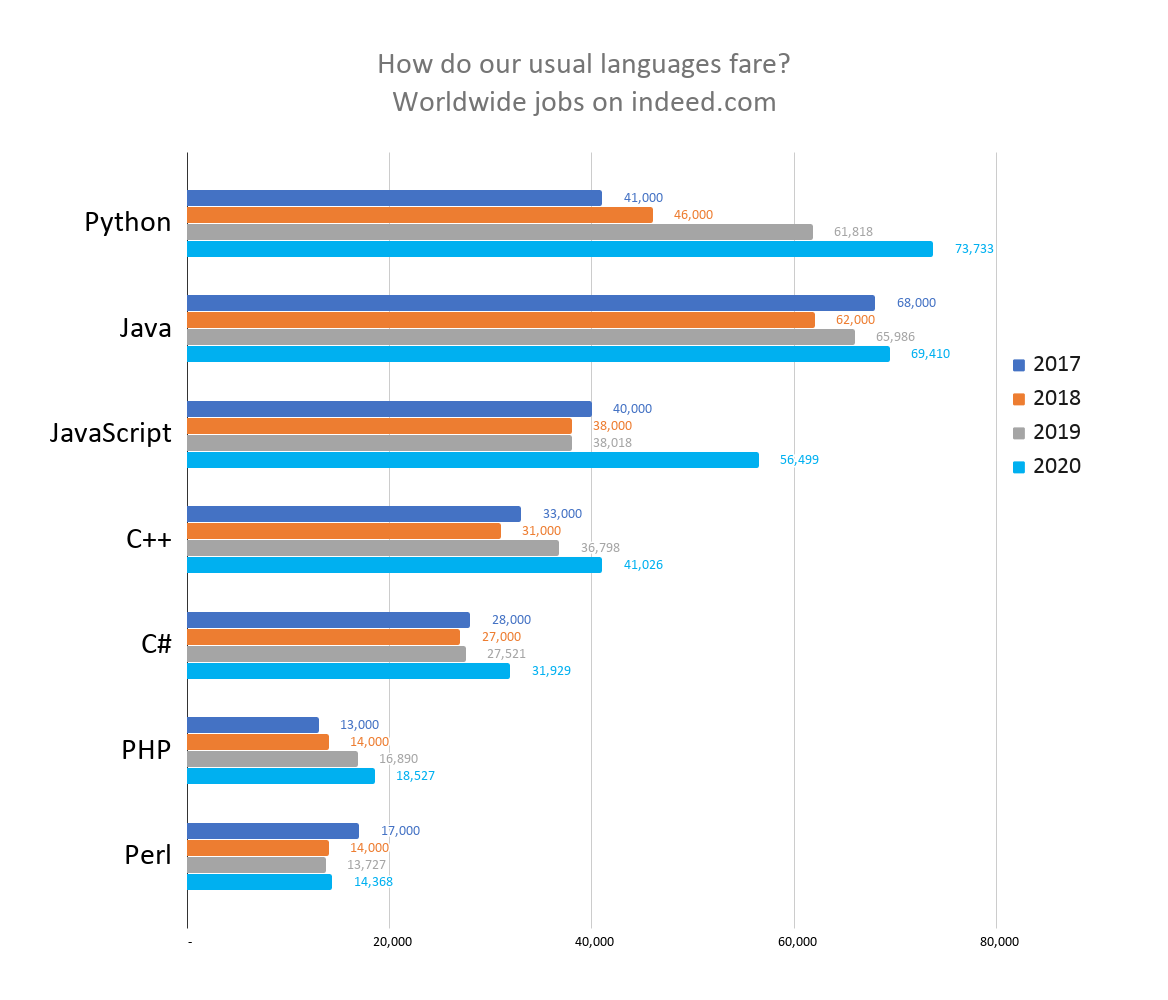 Among the top programming languages of 2020, Python & JavaScript have moved the most

Over the last few years, Python has been steadily rising through the ranks of the programming languages. This year, it’s finally broken past Java’s streak and surged ahead. Meanwhile, there’s been a surprise resurgence in JavaScript, perhaps indicating that employers are looking for more front-end developers as they redesign their websites. Meanwhile, every other language has stayed steady, with a gradual increase across the board. It would seem that the demand for programmers is still rising, and we doubt it’s peaked just yet.

Let’s look at the top programming languages of 2020 in a bit more detail and what they’re primarily used to create.

Python: The most versatile of the top programming languages of 2020

Applications. Simple scripts. Links to databases. It’s possible to create pretty much anything in Python. Plus, it’s also used to create neural networks for artificial intelligence. Part of this is due to the vast standard library, but also because it’s compatible with most major systems and databases. Lastly, it’s a language with quite simple syntax, making it very easy to read. It’s no surprise that it’s the top of our list.

Do be careful: Python 2 was discontinued this year. So it’s time to move to Python 3 if you haven’t already. This might cause problems with older programs, as the two versions aren’t completely compatible. Perhaps this is why we’ve seen a surge in demand.

Java: The workhorse of programming

With the philosophy “Write once, work anywhere,” it’s very popular with businesses looking to make sure their applications have a consistent user experience. Java programs should be able to run over a network, without it mattering what operating system the user is running.

It’s also widely used for Android applications, which is likely why in the past it’s always been our top contender.

Most web browsers are compatible with JavaScript now. It works with HTML and CSS to allow businesses to create interactive sites. It’s an extremely important addition to the top programming languages of 2020, as most websites rely on the functionality that JavaScript brings.

It’s worth noting that it’s primarily a front-end language, and you shouldn’t confuse it with Java. While the two languages have similar syntax to C, that’s where the similarities end.

To understand the difference between C, C++ and C#, you need to understand at which level the language runs. C runs directly on top of Assembly, the language a computer reads to actually perform tasks. So C is mostly used to create operating systems or older programs.

C++, on the other hand, is essentially a level above C. It builds on the language and allows for object-oriented programming. Because of the ubiquity of these languages, they’re a good starting point for new programmers.

This is the most technically complicated of the C family in our top programming languages of 2020, but can actually be easier to learn. It’s considered a high-level language, because it doesn’t compile into Assembly, but to byte-code. (It runs on a virtual machine, which allocates the memory for you.)

It’s commonly used to create internal applications for businesses, so developers will likely find themselves making bespoke software. Perhaps this is why we don’t see as much demand these days, as businesses move to more web apps and cloud-based services.

PHP: The language of servers

This top programming language of 2020 is primarily used on websites to get data out of a database. It can be embedded directly into HTML to create web applications. As an open-source language, it’s constantly changing and improving. But it seems that the demand is still low in comparison to languages like JavaScript.

Perl: The duct-tape of the internet

Originally Perl was designed to manipulate text, but has now expanded to network administration, web development and applications. It’s quick to create programs in Perl, so it’s quite common to see it used for prototypes, where a business just needs to prove that the concept works.

The downside is that Perl gets a bit of a bad rap. This is largely due to the code that developers write, rather than the language itself. And over the last few years, jobs have remained steady, if low.

What else are employers looking for?

Searching through dozens of languages, we also noticed that employers are also looking for developers skilled in periphery and more specific languages. Here’s our combined list for this year. 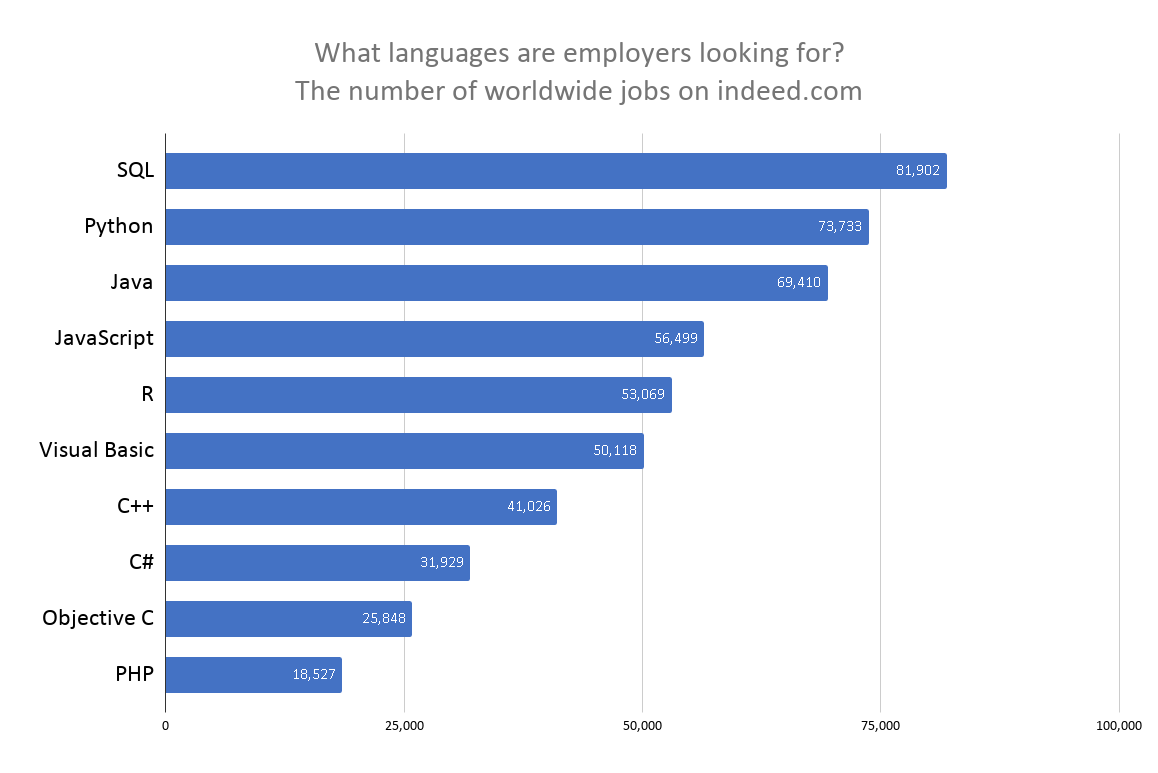 In this search we found that, while Python and Java are still near the top, SQL is a language that every programmer needs to know. It also seems that R and Visual Basic are worth learning.

But what are people training in?

Using Google Trends, we looked at what people were searching for. What courses? Training? What were they wanting to learn?

Google Trends doesn’t give exact figures, but does give weight to the results. This gives us a good estimate for which languages people want to be trained in. 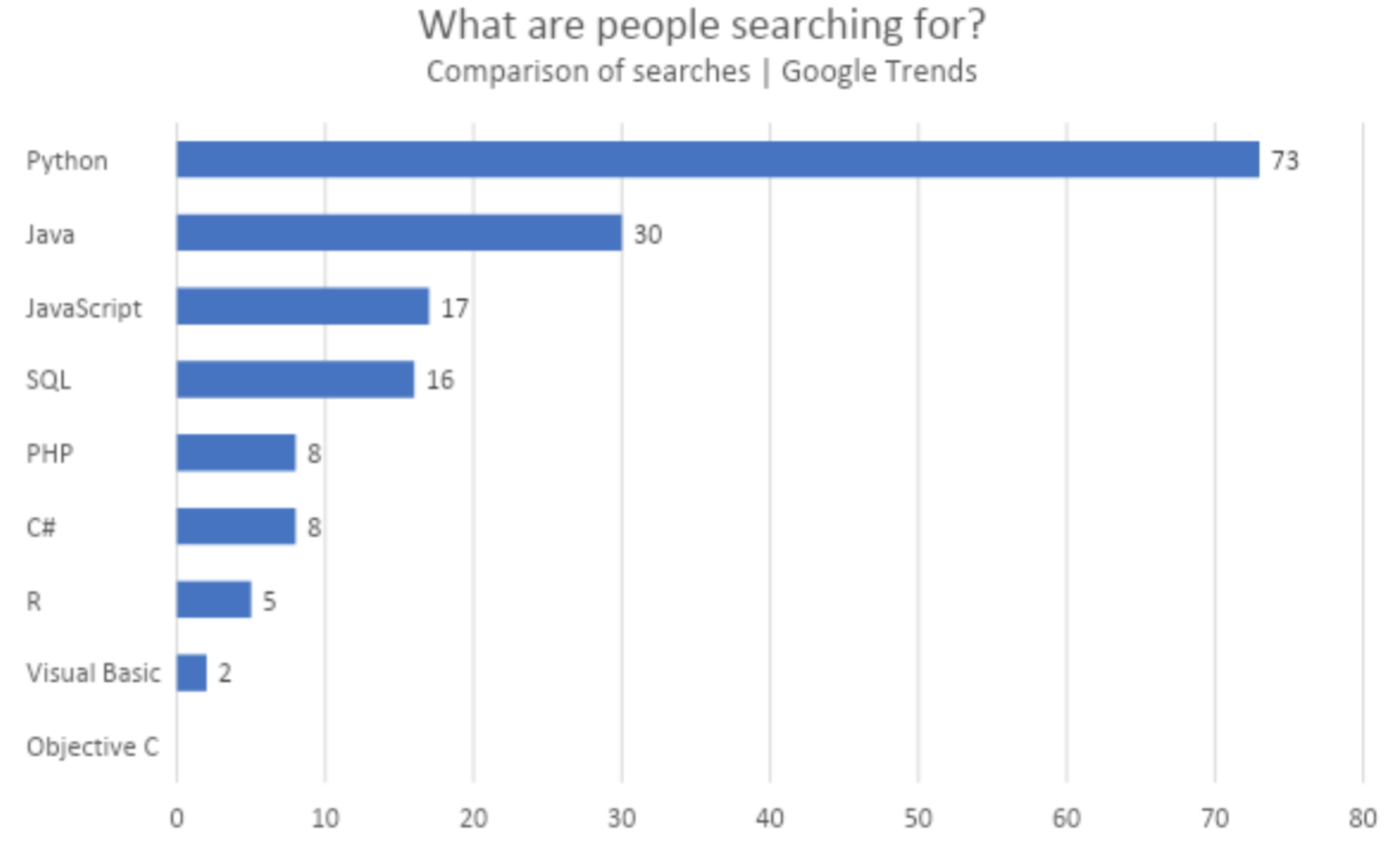 Based on these results, it seems that programmers are extremely interested in Python. In fact, it’s the most popular language for training. It almost received as many searches as all the other languages combined. So we’re confident that those Python jobs will be filled.

But, while SQL is the most popular with recruiters, it’s one of the least searched for training.

Which top programming languages of 2020 are out of balance?

It seems that there are a few discrepancies between what people are searching for and what jobs are available. Let’s look at a few examples.

Should you be learning SQL?

So many jobs, but hardly anyone is actually searching for the training. Is that because the workforce is already trained? Or is this a sign that there aren’t enough people who know SQL out there?

SQL is a language used for managing and updating databases. It’s often coupled with another language, like C#, which then takes the data and does the heavy lifting. And often larger businesses will have an SQL server, storing huge amounts of data about their products, for example. Knowing how to manipulate and control this data correctly is essential for those roles. So if you’re learning a language like Python or C#, it’s worth checking to see whether you’ll also be learning SQL.

Is the rise of R an opportunity?

There are over 50,000 jobs for R, but it seems that hardly anybody is searching for training. But why is R so hot right now?

It could be because there’s been a huge increase in data analytics. The “internet of things” has meant that more and more devices are connected, and social media analysis is a hot topic for marketing departments. All of this data, and too few people skilled enough to look through it and find the answers. This could well be why the language is in demand.

Visual Basic has made a comeback

It’s missed our top list for the last few years, but it seems that it’s suddenly in demand once again. Why? We’re unsure. It could be that in the past recruiters put VBA or VB.NET on their job ads, for instance, which would skew our results.

Either way, it’s definitely popular this year. And yet people aren’t searching for training in it.

But what is Visual Basic? Well, it’s quite like C++. The two share common roots, and if you know one, it’s quite easy to pick up the other. (Though, the syntax does differ.) The key difference is in the style. In Visual Basic you write in a way that’s much closer to English, while C++ feels more like putting algebra equations together.

The best bet? Learn a variety of languages.

The job market is always changing. While Python is clearly rising, it’s likely to change next year. There are a few stable languages which always seem to be in demand, like Java and C++. But the popularity for languages ebbs and flows. And new languages are always coming into fashion, like Ruby, Swift and R.

By getting a few under your belt, you can make sure you’re always in demand. Regardless of the job market. That’s why we teach three full stacks.

If you’d like to learn a new language, read more about our courses.